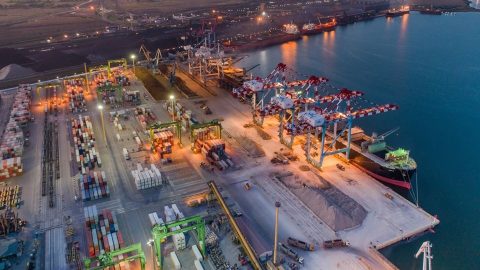 DP World will add a new container terminal to its network. The Dubai-based logistics group plans to purchase a majority stake of 51 per cent in TIS Container Terminal, one of the largest intermodal facilities in Ukraine. This acquisition is the third container terminal of DP World in the Black Sea region after the sites in Constanța, Romania, and Istanbul, Turkey. Ukraine will become the 51st country in the worldwide network of the Dubai-based company.

“A partnership with DP World will give TIS Container Terminal the opportunity to attract new container lines, develop additional services inside the terminal, and expand the bundle of general and bulk cargoes. In the nearest future, the terminal will be able to offer its customers new services, as well as an even higher quality of operation”, TIS Container Terminal stated.

This facility was established in 2009. It is the deepest (16 metres) container facility in the Ukrainian seaports with 15 regular container trains a week running all over Ukraine and two shipping lines of Maersk (ECUMED and ME-3). Currently, the terminal is owned by TIS Group, the largest private operator of seaport terminals in Ukraine (over 31 million tonnes of the 160-million-tonne traffic in 2019).

To operate TIS Container Terminal in the future, both parties, DP World (via ‘DP World Ukraine B.V.’, Rotterdam, the Netherlands) and TIS Group (via ‘Star Span Holdings LTD’, Nicosia, Cyprus), have incorporated a joint venture ‘Container Terminal Yuzhny B.V.’ (Amstelveen, the Netherlands) with the relevant stakes of 51 and 49 per cent. The antitrust authorities of Ukraine approved the deal on Thursday, 13 February.

DP World has been eyeballing the Ukrainian market since 2015. In October 2016 the Dubai-based company even signed a memorandum on cooperation with the Infrastructure Ministry of Ukraine. The latter had long-pending negotiations with DP World in order to attract its investment in the Ukrainian container facility. However, the logistics company from the United Arab Emirates entered Ukraine via the tug service sector. Together with TIS Group, DP World established P&O Maritime Ukraine, a joint venture focused on tug services in the Ukrainian seaports.

TIS Container Terminal is located in the Port of Yuzhny. In 2019 the facility handled around 219,000 TEU having set a growth of 75 per cent compared to the 2018 data. At the same time, the entire container traffic in the Ukrainian seaports exceeded a figure of 1 million TEU.