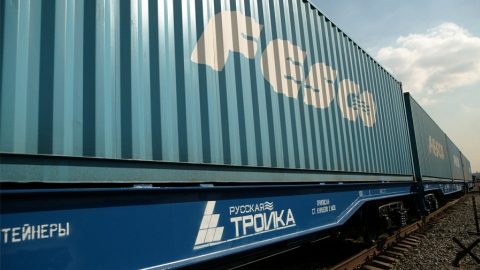 FESCO Group has purchased a stake of 25 per cent plus one share in the intermodal operator Russian Troika. The deal valued at around 9 million euros was concluded with Russian Railways (RZD). As a result, the shipping and logistics group became the sole shareholder of Russian Troika and got more options for the development of its intermodal business.

In December 2019 RZD held an auction for the sale of the remaining package of shares of Russian Troika. It was FESCO that won this competition. Before this, the shipping and logistics group owned a stake of 75 per cent minus one share of Russian Troika. The deal between FESCO Group and RZD was finalised at the end of January of the current year. It cost 622 million rubles (around 9 million euros).

“The consolidation of the company’s shares complies with the development strategy for container transportation, the key business segment for the group. The rolling stock of Russian Troika will be used for the intermodal services to deliver freight on the Trans-Siberian Railway”, FESCO stated after finalising the deal. It also noted that the direct consequence of the acquisition is the strengthening of the wagon fleet: Russian Troika owns 1,638 flat wagons while FESCO has 4,435 flat wagons. Moreover, the logistics group operates other types of wagons: 4,435 flat wagons, 2,108 open wagons, 1,576 hopper wagons and others.

FESCO (abbreviated from the Far Eastern Shipping Company) provides multimodal services including shipping lines, railway connections and last mile delivery performed by lorries. The Russian transport group owns 20 vessels that sail from Vladivostok to China, Japan, South Korea and India. As for the rail freight service, FESCO operates a series of container shuttle trains across Russia (from Vladivostok to Khabarovsk, Krasnoyarsk, Novosibirsk, Yekaterinburg, Moscow, Saint Petersburg) as well as to Belarus (Minsk) and Uzbekistan (Tashkent). Also, the group serves the shuttle train between Vladivostok and the Chinese border railway station of Suifenhe.

Moreover, FESCO owns 88 lorries for the last mile delivery to or from its intermodal terminals in Vladivostok, Khabarovsk, Novosibirsk and Tomsk. At the same time, FESCO operates the Port of Vladivostok, the largest harbour in the Russian Far East. Owing to all these activities, the group succeeded to launch the multimodal corridor from Japan and South Korea to Europe.