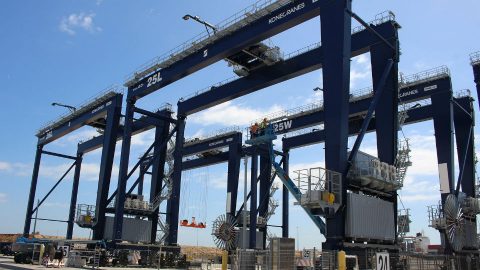 BEST container terminal in the Port of Barcelona received 6 new automated cranes (ASC) from the Finnish supplier Konecranes, thereby increasing its storage capacity from 24 to 27 automated blocks. Currently, these blocks are being assembled and tested and they are expected to be fully operational in June this year.

These cranes are electric and move on rails, like most of the terminal ́s equipment, since Hutchison Ports Group is committed to build an efficient and environmentally sustainable terminal in the Port of Barcelona. Guillermo Belcastro, Hutchison Ports BEST CEO stated: “This investment will result in a significant increase in operational and storage capacity at the terminal and will contribute to our continuous improvement of service levels both in maritime and land operations.

It has one of the largest railway terminals within a container terminal in the Mediterranean, with eight mixed gauge tracks (Iberian and UIC). Hence, it offers daily connections with different points of Spain and the South of France.

the content is good, nice information
even for same related blogs you can visit https://www.sgffab.com