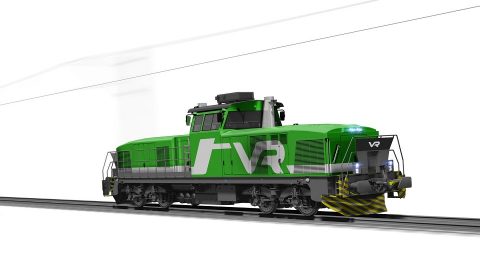 Stadler Rail has concluded an agreement with Finnish state-owned railway company VR Group for the delivery 60 new diesel-electric shunting locomotives. The vehicles will improve the operational efficiency at marshalling yards, freight terminals and on non-electrified routes which make up 45 per cent of the country’s rail network. The contract includes an option for 100 additional locomotives.

The deal is worth circa 200 million Euros. The shunting locomotives will be produced at the Stadler’s facility in Spain. “This represents a major milestone for Stadler. It strengthens our position in the shunting segment, a market niche, which is expected to grow considerably in Europe in the forthcoming years. This versatile vehicle will be designed principally for yard operations as well as for hauling freight trains in main lines, in an efficient and reliable way under extreme temperature and weather conditions”, said Iñigo Parra, CEO of Stadler Valencia.

The new shunting locomotives will be delivered to Finland in 2022-2025. They will replace old vehicles that are less energy-efficient and produce more emissions. The new units will also be fitted with radio control equipment and ETCS Baseline 3, with the local STM ATP safety system and the latest generation of the vehicle control system including remote diagnosis features.

The locomotives will have a maximum starting tractive effort of 346 kilonewtons that is enough for hauling a 2,000-tonne train. The vehicles will be customised for climatic conditions of Finland: they will be capable to withstand the effects of the snow and ice and to operate at temperatures as low as -40 degrees Celsius. The shunting locomotives of Stadler can speed up to 120 kilometres per hour.