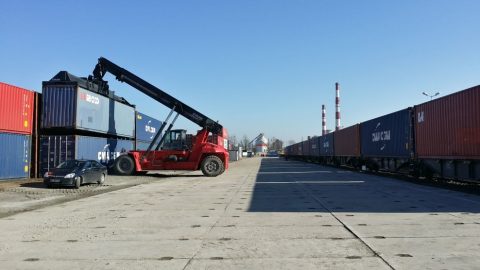 Baltic Rail, an Estonia-based company, is developing a container train service between Southern Poland and the Slovenian port of Koper. The operator hopes that other countries will also connect to the route. Director of operations of Baltic Rail Vadim Shabarov illustrates the future plans of the company in an interview with RailFreight.

Baltic Rail AS has been operating rail freight services on the Baltic-Adriatic route since 2011. In seven years, the company has achieved significant results in container traffic volumes between Southern Poland and the port of Koper. “We started our activity with several dozens of containers in 2011. We expect that in the following years we can strongly increase our figures (see graph),” said Shabarov.

His company chose Koper as a port hub for the Polish market. At that time it was a revolutionary decision. When time passed, the necessity and prospective became clear. “For this year, we forecast to handle 12,900 TEUs. So far, in nine months, we made more than 75 per cent of this and the busy autumn will show if we will achieve this goal,” added Shabarov.

(Story will continue below graph) 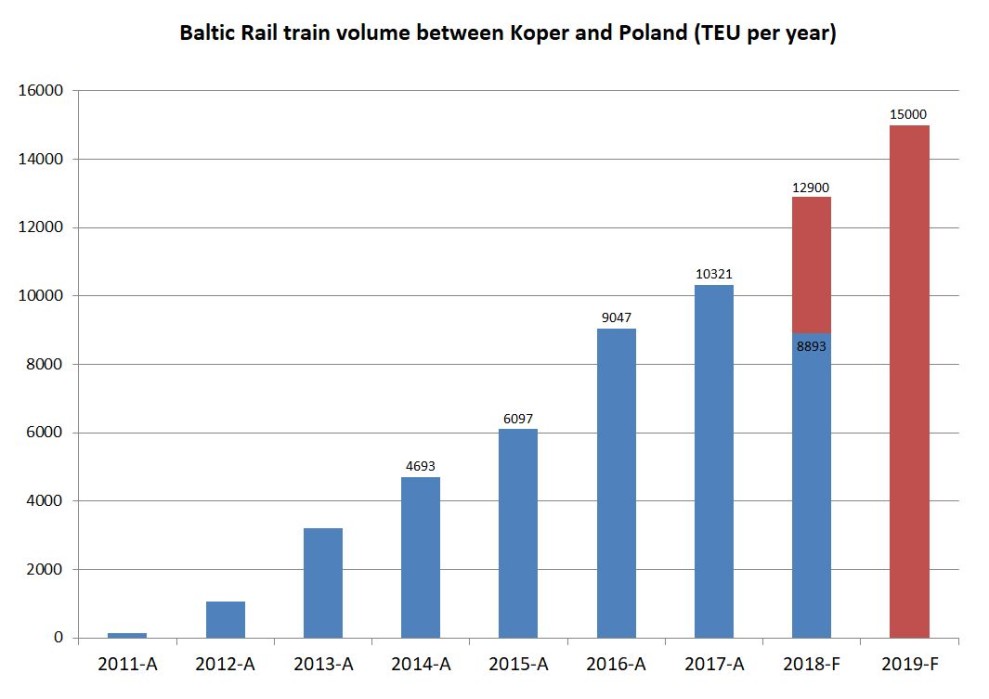 Baltic Rail AS is part of Rail World Group, a Chicago-based rail and investment holding that in 2001 purchased shares of Estonian Railways (Eesti Raudtee). Six years later, the Estonian government decided to buy back the railway company. Nevertheless, Rail World Group remained in Estonia and established a new subsidiary. “Baltic Rail AS was incorporated in 2008. However, we ran our first train on the Baltic-Adriatic Corridor a little bit later in 2011”, said Shabarov. The new company changed the focus of group’s activity to freight forwarding.

Baltic Rail AS has chosen Poland as a focus market for its activity but it has offered to its customers a new opportunity – handling cargo via the port Koper. “It was very difficult at the beginning because the whole Polish market handled its goods via the ports of Hamburg and Gdansk or Gdynia. Many people in Poland never heard of Koper, fewer had tested it. It was very revolutionary to ship containers from the north via southern gateways,” Shabarov looked back.

However, figures convinced the customers not to hesitate. “Transportation of products via Koper opened new possibilities for money saving. For example, the way from Koper to Hong Kong is more than 4,000 kilometres shorter than the one from Hamburg. If the route is shorter you can save money, even if you use the train from Koper to Katowice. Therefore, the port of Koper is a smart opportunity for southern Poland.”

Initially container service of Baltic Rail AS embraced the entire route between the Baltic and Adriatic seas. In the course of time, the route was shortened to its main section – between southern Poland and the Slovenian port of Koper. “Now our trains run only in the Koper – Wroclaw – Katowice – Koper triangle. We are ready to restart our train service to Gdansk or to start a new train service to any other destination, as soon as customers request this. We regularly evaluate different projects and tenders, and we are able to react to all interesting requests quickly,” Shabarov explained.

Baltic Rail AS works on the Baltic – Adriatic route together with several partners. The Estonian manager explained the transportation model on the way to Koper: “Our model is to have our own wagons and to buy locomotive services from the open market. In Poland our trains are serviced by locomotives of Rail Polska, our sister company that is also a member of Rail World Group. Outside of Poland, we use services of companies of Rail Cargo Group and PKP Group.”

(Story will continue below map) 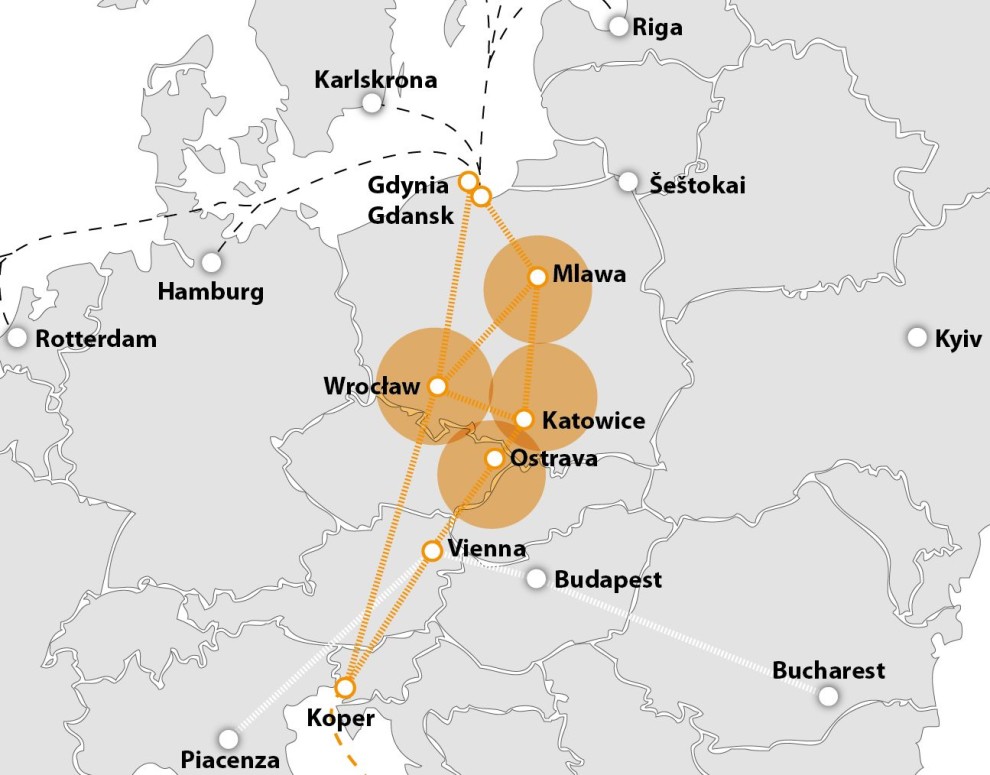 According to Shabarov, the company has received one additional wagon set this year and has ordered one more wagon set for 2019. Therefore, the operator has all the necessary to launch the full service if the market demands it. Meanwhile, Baltic Rail AS uses trucks for pre-carriage to Poland. “Today we deliver many containers from a wider region, for example, from the Baltic states to Koper with pre-carriage to Poland by truck. From that point of view, the full corridor is served.”

Currently, Baltic Rail AS owns two intermodal terminals on the Baltic – Adriatic route in Poland – near Wroclaw and near Katowice and considers to launch a third one. “When the portfolio of customers grows, we plan to open a third terminal – near Warsaw. We are very flexible. If we find the right setup and right partner, we are ready to open a new rail terminal and a new rail service in other countries around our corridor,” Shabarov shared the company’s plans.

Currently, the company runs five or six trains per week in the Koper – Wroclaw – Katowice/Ostrava – Koper triangle. “This is the largest scheduled intermodal operator between Poland and the Adriatic. September 2018 was the busiest month ever with more than 1,300 TEUs. When we started, most our trains were loaded predominantly in one direction – mainly import from the Far East to the industrial region of southern Poland.”

“Now we have a developed portfolio of exports from Poland to the Mediterranean, North Africa, the Gulf and Middle East regions,” he said. The main cargo carried by Baltic Rail AS are electronics, white goods, automotive and forest products. “We also provide steel coil handling solutions using 40′ intermodal heavy flat-racks.”

According to Shabarov, the container service between southern Poland and Koper is a key part of the supply chain in the so-called ‘New Banana’ or ‘Green Banana’ – a highly developed and densely populated part of Central Eastern Europe between the Baltic seaports of Gdansk, Gdynia and the Adriatic ports of Koper, Trieste and Rijeka including some portions of Poland, Czech Republic, Slovakia, Austria, Hungary, Slovenia, Italy and Croatia. “We are taking part in the process of building our own “New Banana” here in Eastern Europe – from the Baltic Sea down to both the Adriatic Sea and the Black Sea.”

Shabarov believes that the Baltic-Adriatic route is a prospective one. This is proved by container volume growth in the port of Koper in the last seven years. This year volumes are expected to increase from 600,000 TEUs to 1,000,000 TEUs.

“We see that container volumes in the port of Koper are growing faster than almost any other port in this part of the world. Direct ocean vessels calling from Asia are getting bigger and bigger. Rather sooner than later they will get the same size as ships to German or Polish ports and then ocean rates to Koper become even more competitive to the current level. Big production companies know it is coming and many people want to take position before it gets more congested,” Shabarov said.

However, the Baltic-Adriatic route has other options for growth. The Rail Baltica project is considered as one of them. This 1435-mm railway between Poland and the Baltic States is under construction now. In the future, it will connect them with the rest of the EU rail network. “We believe that the Rail Baltica project will open new opportunities for cargo transportation in this region. The container traffic in Eastern Europe will continue to increase and new countries will join to the Baltic-Adriatic route,” he concluded.