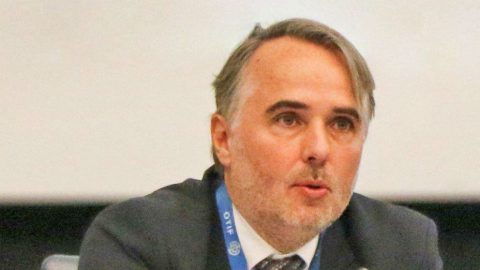 François Davenne, Secretary General of OTIF (Intergovernmental Organisation for International Carriage by Rail) has been appointed the new Director General of UIC by the UIC General Assembly. His mandate will start mid-2019.

This was announced by UIC on Wednesday 4 July. With the appointment, Davenne will take over the position from current Director General Jean-Pierre Loubinoux, who has occupied the post since March 2009.

Davenne has headed OTIF since 2013. His mandate was extended in 2016. OTIF works to create a harmonised body of railway law linking Europe, Asia and Africa. OTIF and UIC have worked closely together for many decades, and have often joined forces to foster interoperability and seamless international operations across rail networks.

UIC is a rail-sector body represented at the highest institutional level, and has held consultant status to the UN since 1949. The organisation promotes railways and the collaborative development of the rail system worldwide. It maintains close collaborative links with all the world’s rail-sector stakeholders, specifically other railway organisations, public authorities, manufacturers, as well as other non-railway stakeholders whose work can positively impact railway development. UIC and OTIF are the world’s oldest international railway organisations.