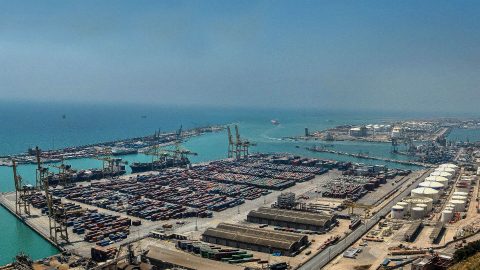 Port of Barcelona European port with largest growth in 2017

Rail freight volumes handled by the Port of Barcelona amounted to 243,800 TEUs in 2017, indicating an increase of eight per cent compared to the previous year. Its container traffic totalled 2.98 million TEUs, 32 per cent more than in 2016. With these statistics it was the European port with the largest growth.

The Port of Barcelona is currently not the most important Spanish port, having been overtaken by the ports of Valencia (4.79 million TEUs) and Algeciras (4.30 million tonnes). However, Barcelona has the competitive advantage of having railway connections with France using central European gauge track and being able to handle 750-metre trains. Its Spanish rivals are not connected with the Mediterranean corridor yet.

In addition, Barcelona port is an essential gateway for the automotive industry of the Catalan region, the most important industry sector in Spain. Railway companies Deutsche Bahn and SNCF operate two services for the automotive industry, connecting to the Port of Barcelona. These services have been essential in strengthening the leading role of this industry on the Spanish market. Once the Mediterranean corridor has been completed, the ports of Valencia and Algeciras will also be connected.

The Port of Barcelona is growing at a similar rate to other Mediterranean ports, such as Piraeus in Greece and Genoa and Gioa Tauro, both in Italy. However, analysts estimate the activity will decline in 2018 due to strikes and social instability created by the pro-independence movements in the region, many important companies having located its headquarters outside the area.