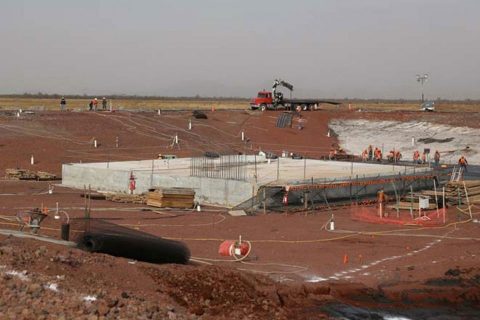 The new international Mexico City airport (NAIM), which is currently under construction, has just been connected with the national railway network for freight and passenger services. With this railway line, the airport is connected to the Gulf of Mexico, the Pacific Ocean and the US. Once the airport completed, the new logistics hub will be connected through rail to the Port of Veracruz, which is also under construction.

For the moment, the 14-kilometre long railway track will be used to complete the construction of the new airport. The vice-minister of Transport and Communications (SCT), Gerardo Ruiz Esparza, noted that the new infrastructure would decrease the civil work CO2 footprint because its supply will not need to be transported by trucks from Mexico City.

The new rail connection was built at a budget of 1.4 billion Mexican Pesos (62.3 million Euros), by rail freight company Ferrovalle (for sixty per cent) and the Mexican Airport Company (for forty per cent. NAIM project was launched by the President Enrique Peña Nieto in 2014, after several unsuccessful attempts.

This new logistics hub has been designed because the current Mexico City airport has reached its maximum capacity, with over thirty per cent more ideal transit passengers that what is considered ideal. Once completed, the new airport, which is at a distance of only five kilometre from the current airport, will be the biggest airport in Latin America.