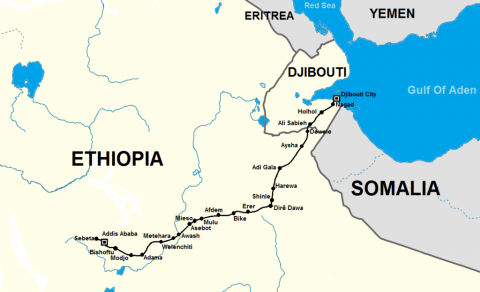 A new rail network between Addis Ababa, Ethiopia’s capital, and Djibouti port started in January, an infrastructure linking the country with the Indian Ocean.

This railway track is 750 kilometres long and is the first completely electrified line in Africa. It is strategic for Ethiopian mineral and agricultural exports, after the country lost its coastline following Eritrea´s independence in 1994. Relations between Ethiopia and its former territory are tense, having chosen Djibouti as its key port.

Rail freight journeys take around 24 hours to complete. Before the completion of this state project, the goods were carried by tracks through outdated 1,500 km-long roads. This route took not only several days but was dangerous due to continued violent assaults, which increased export costs.

The project has cost four billion US Dollars and has been jointly developed by the China Rail Engineering Corporation (CREC) and the China Civil Engineering Construction Corporation (CCECC). The railway network has been promoted by the Chinese government, which wants to secure its commodity supply from Africa’s east and west coasts and its economics concessions in several countries, such as the management of salt extraction at Assal lake in Djibouti.

After suffering severe food crises in the 1980s and 1990s, Ethiopia is enjoying a notable economic development. This is based on its gold and agricultural exports, mainly coffee, dried beans and seed oils, having attracted Chinese, Singaporean and Indian investors to construct processing plants, due to its updated connections with Djibouti, which until 1977 was a French colony.

It would be nice to hear of more from Ethiopia as this line has been operational for about three years now.

Can we have more stories from East Africa? There is also a standard gauge railway between Mombasa and Nairobi though it is not yet electrified