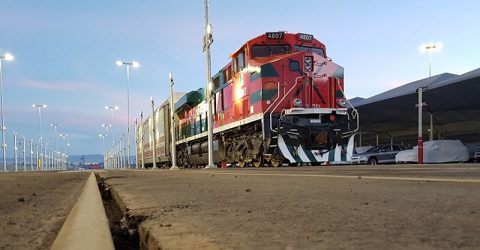 The train carries an average load of 11,500 tonnes. This project is considered as strategic to revive Salina Cruz port, which can manage 1.2 billion tonnes yearly, but currently only carries around 350 million tonnes. That is despite it having an ideal logistics position on the Pacific coast of Tehuantepec Isthmus, only 215 kilometres from from the Atlantic coast, where the main Mexican port is Veracruz.

Angel Perez, Manager of Salina Cruz Port Authority, said it was the ideal import gate for southern Mexico on the Pacific coast, connecting with inland states such as Mexico, Puebla or Morelos and Chiapas in the south. Perez estimated that a good rail freight connectivity could lead to around 700 new jobs in the port. A port revival would avoid using the Panama Canal for imports via the Pacific Ocean and also strengthen the logistics and industrial value of Tehuantepec Isthmus.

This project has been supported by the national government to push the development of the southern Mexican states and their economic convergence with northern ones such as Guanajuato, Coahuila, Baja California and Nuevo Leon. All of these have become important export hubs.