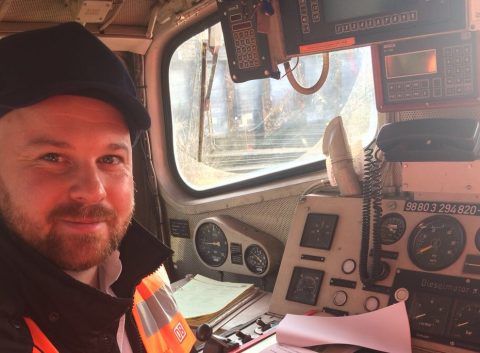 The freight subsidiary of German’s national train operator Deutsche Bahn says it has tuned the engines of its shunting locomotives to save fuel and thus Co2. Instead of performance, the machines have been trimmed for efficiency – the result being less fuel consumption but with the same power.

DB says certain characteristic curves of the engine control, such as the injection pressure, the duration of injection and the injection time have been adjusted. After the new maps have been added to the electronic engine management of the locomotive, their drive consumes an average of 2.5 per cent less fuel.

To ensure that not all 400 locomotives of the series 290, 294 and 296 would be affected individually for the conversion to the factory – that would have resulted in unnecessary ‘downtime’ – the company collaborated with MTO-Engineering to develop a mobile data flasher. These devices are connected to a standard smartphone, enabling the existing maps to be read and the new ones loaded later. The whole process takes less than 15 minutes.

Engine modifications have been performed in almost all of DB’s 400 shunting locomotives over the past few months. This will produce 800,000 litres of fuel per year, enough to cover the earth at the equator 333 times with a car (6l / 100 km) – and save 2.1 million kilograms of CO2.

DB Cargo has set itself the goal of reducing specific final energy consumption by 30 per cent by 2030 compared with 2006, among other things through sustainable transport solutions (Eco Solutions) and the modernisation of its fleet. At the same time, CO2 emissions are to be reduced by around 36 per cent.