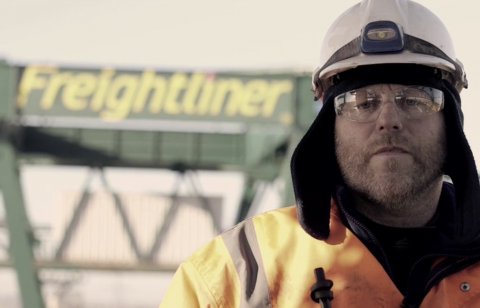 A powerful safety message film featuring employees from Freightliner UK has won a commendation at an international film awards ceremony. The rail freight operator’s efforts to tackle safety in the workplace were recognised at CineRail 2017, the 22nd International Railway Film Competition.

Held in the Portugese capital of Lisbon, this was the first time that CineRail, a bi-annual event, had been held outside France. The idea is to show the public the work being done in the cinematic and audio-visual world exclusively about railways.

A ‘Special Mention’ was given to Freightliner for its depiction of various employees reciting lines from the poem ‘I could have saved a life that day‘. Written by American Don Merrell, the poem highlights how speaking up about unsafe acts in the workplace can save lives and help develop a positive safety culture.

Featuring a series of powerful lines, including ..’but I didn’t want to seem the fool, and argue over a safety rule’, the 2 minutes, 30 seconds film is produced by rail and transport films specialist Picturascope and directed by Robert Pendlebury. It closes by complementing Freightliner’s own safety message, Zero injuries: Our Goal Every Day’.

Freightliner said that following its acquisition by Genesee & Wyoming Inc. (G&W) in March 2015, it had embarked on ‘a new journey’ to enhance its safety performance and culture to the next level. John Battershall, Director of Safety, said: “At Freightliner we believe we are all responsible for the safety of ourselves and our fellow colleagues and felt that the most effective way of engaging the workforce with this safety message was to encourage them to be active participants in the journey. We filmed with real employees who had no experience of being on camera, but coached them to feel as though they were ‘in the moment’ of confessing their part in the accident of a work colleague.

“To make it as authentic as possible, we filmed Freightliner team members in their own workplace. This meant the film crew filmed from 200ft-high freight cranes, in train driver cabs, at quiet Peak District sidings and at port terminals – all while adhering to Freightliner safety principles to protect both the film crew and the employees on camera. The contributors gave incredibly natural, emotive performances that carried the message with incredible power,” said Battershall.

The film, he added, had proven so popular that G&W was now using it as part of its own global approach to staff safety training. “Thanks to the film, lorry drivers, crane operators, shunters and clerical staff from Birmingham, Sheffield, Southampton and London are influencing safety behaviour around the world. It has succeeded beyond everyone’s expectations.”

The recognition for Freightliner at CineRail 2017 came in the Internal Communications category, which was won by SNCF France for a passenger safety film. The category of Innovative Services for Passengers and Freight was won by the Wuppertal passenger suspension railway. The Rail as Sustainable Transport category went to the UK-based Rail Safety Standards Board for ‘RSSB – Our Story’, which shows how the company develops standards by working with industry partners.