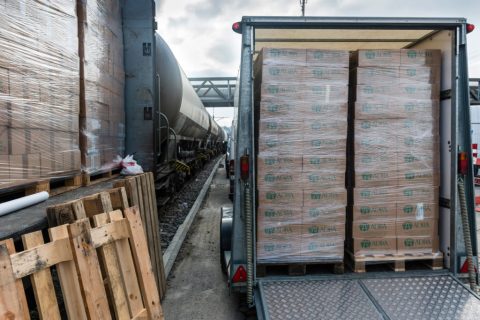 Swiss rail freight carrier SBB Cargo has teamed up with international aid agency Adra to deliver a very different kind of cargo this festive season. By transporting containers full of donated essential items, they are putting smile on the faces of some of Europe’s poorest children and their families.

Every year Adra’s Switzerland operation sends more than 3,000 donated Christmas packages to Moldova, one of the poorest countries in Europe. Everything from toys to sweets, and household goods to toiletries are given by people keen to help those who are not so fortunate as themselves.

Packages are collected in Marin, in the west of Switzerland, and loaded onto SBB freight trains for onward transport to Winterhur, where packages from the German-speaking region are also loaded. The train then goes to the eastern hub of Buchs, near the border with Austria, where the parcels are handed over to Austrian colleagues. They transport the parcels to the Hungarian border, and from there it is through Romania and onto the final destination of Moldova.

Around 25 tonnes of gifts are donated and distributed in this way every year, with SBB Cargo and their rail freight counterparts in neighbouring countries providing their resources free of charge. Yet despite this generosity, SBB says many children are still in need of help. Even getting hold of supplies for school takes ‘an immense amount of energy’ for family, and so each of the packages donated ‘fulfills a dream’. Read more about SBB Cargo and Adra’s work online.

SBB meanwhile has also reflected on a successful first year of carrying cargoes through the vital new Gotthard Base Tunnel, and is now putting the focus on interoperability on its fleet of locomotives. A year after a major timetable change was introduced across the rail network to facilitate the new tunnel under the Swiss Alps, SBB Cargo said that despite a difficult start, all the effort ‘had been worth it’.

Two decades in its construction, the 57km (35-mile) twin-bore tunnel – the longest railway tunnel in the world – provides a vital high-speed rail link between northern and southern Europe. While around 160 daily freight trains previously travelled the Gotthard north-south axis, the new tunnel has increased this to 210, many of which are operated by SBB.

Now it has officially christened the first of its new Vectron locomotives, ‘Olten’, as part of an order from Siemens, which will see a further 17 locomotives delivered by May next year. These new multi-system locos, says SBB, will greatly increase productivity along the Gotthard route.