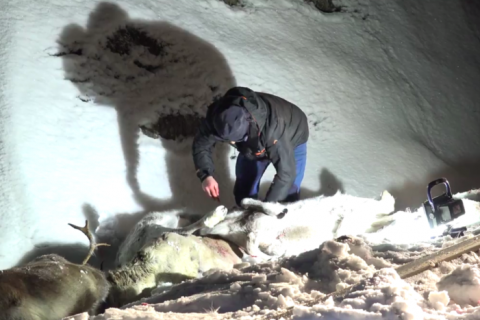 The death of more than 100 reindeers hit by freight trains in a remote region of Norway has prompted national rail infrastructure manager Bane NOR to have crisis talks with animal management teams after a failure of the early warning system for train drivers.

Bane NOR said that at least on one occasion there had been a technical fault in the system which warns freight train drivers that reindeer herds have encroached onto the track area, and this would automatically mean the train would slow down to a safe speed as it approached.

But this appears to have failed, causing the train to hit the herds, on this occasion hitting 12 of the animals. In total, says Bane NOR, there were eight incidents – for reasons unknown – of trains hitting reindeer on the Nordslandsbanen line between Kvalfors and Mosjøen from November 22-25. This resulted in 110 reindeer deaths, bringing with it for train staff the grisly job of having to remove reindeer carcasses.

Thor Bræken, Area Director at Bane NOR, said it was important to establish the facts of what had happened on each occasion, adding: “We are now investigating carefully the circumstances of the warning chain to Bane NOR and further to the driver.”

Many of the animals carry GPS transmitters, which tell local ‘reineirs’ – local reindeer owners who manage the welfare of the herds – when they move from the mountain regions down towards the tracks. These owners have been trying to move herds to the coastal region for the winter. Ole Henrik Kappfjell, one of the reineiers, told Norwegian TV broadcaster NRK he was ‘angry’ at the ‘meaningless’ deaths of the animal with whom they have a close bond. He said that Bane NOR had assured him the trains would drive slowly past the areas but this had not happened.