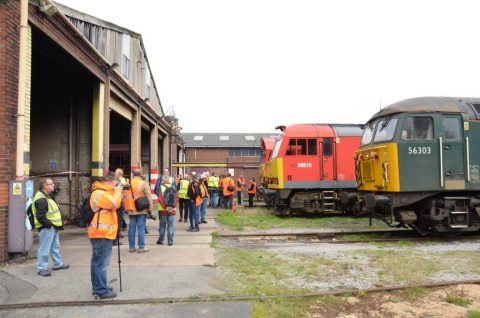 Britain’s biggest rail freight operator DB Cargo UK raised thousands of pounds for cancer research in the UK when it threw open its gates to the general public. Almost 100 people who came along were given a tour of the company’s Knottingley depot and buildings in Yorkshire.

The select few were provided with amazing vantage points for photography of the trains and wagons which were there on the day. DB Cargo UK said the event had been a great success, raising more than £2000 for its chosen charity Cancer Research UK. People were asked to donate £15 each to take part in this rare opportunity and there was also a raffle with ‘money can’t buy’ prizes on offer.

Dave Jenkinson, DB Cargo UK’s Safety Assurance Manager, said: “This is the first time DB Cargo UK has held an event such as this and it proved a great success. The enthusiasm of everyone who came was brilliant and it was a real pleasure to show them what we do at Knottingley. Thank you to everyone that donated money in support of Cancer Research UK, to raise over £2,000 is phenomenal.”

The success of the day was also outlined in some of the attendee’s feedback provided after the event, with one person saying: “It was very well organised from start to finish. I found the day informative and interesting, a massive thank you must go to the staff at DB Cargo UK who were friendly, helpful and knowledgeable. Finally a special thank you for allowing my son and me into a Class 67 cab, it was brilliant!”

Following the successful day, the company said it hoped to hold more events like this in the future.