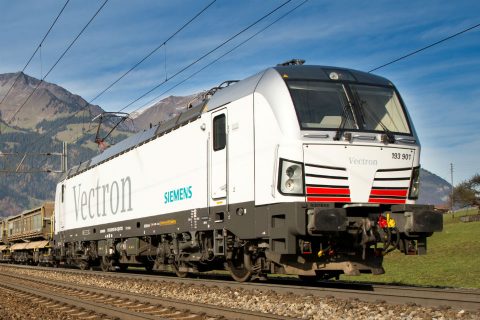 The Vectron MS-locomotive of Siemens has officially been permitted to operate on the Dutch railway network. The permission was granted by the Human Environment and Transport Inspectorate after the completion of a long and extensive test programme. The vehicle is suited for the transport of freight as well as passengers and is expected to positively contribute to the rail freight industry on the Rhine-Alphine corridor.

The Vectron locomotive was presented seven years ago at the rail summit Innotrans in Berlin. Ever since, more than 600 locomotives have been sold on the European market, of which 330 are operative at this point. Within this operative fleet, 121 locomotives are suitable to operate on the railway network of the Netherlands.

The Vectron MS locomotive is equipped to operate on 15 and 25 kV alternating current, as well as 1.5 and 3 kV direct current, which enables it to access traditional but also newly developed railway. Moreover, it is equipped with security systems ERTMS and ATB. “The great advantage of this locomotive is that it can switch systems as it moves, adapting to the required system of the country it enters. This saves a lot of time”, the train manufacturer points out.

Due to a maximum speed of 160-200 kilometers per hour, the locomotive can be deployed for the transport of passengers and freight. Siemens adds that maintenance intervals are lower than with other locomotives, which increases its availability.