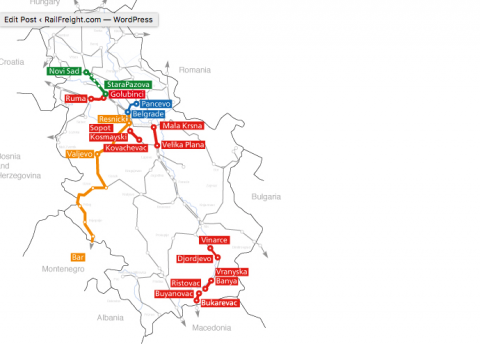 RZD International, a freight subsidiary of Russian Railways, has begun work to rebuild a vital link in Serbia which could eventually see the movement of new freight services between the capital Belgrade and Bar in Montegnegro.

The first part of the work involves the reconstruction of a 35-kilometre stretch between Resni and Vreoci. When the line is finished, it will open up possibilities for the movement of regular coal supplies from the Kolubara coal basin to thermal power plants in Serbia, as well as connecting to the Adriatic Sea.

As part of the modernisation of this stretch, the Bela Reka tunnel has been completely rebuilt, and for the first time in the refurbishment of the Serbian railway infrastructure, track was laid in the tunnel using the technology of a sub-ballast mat, which provides extra cushioning support for trains passing over.

Lines to the Bela Reka, Barajevo, Stepojevac and Vreoci stations are also being rebuilt. As a result of the replacement of rails and sleepers, signalling devices and contact network, train speeds along this section have been increased from 50 to 90 kilometres an hour.