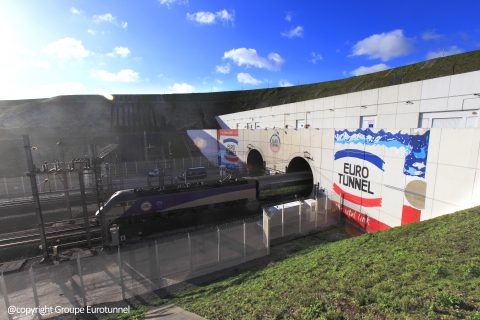 A resurgence in freight traffic through the Channel Tunnel is down to improved security procedures aimed at preventing UK-bound migrants boarding moving trains, according to operator Eurotunnel.

It also says that in the context of the ongoing Brexit process, the company remains ‘very confident’ in the solidity of UK and continental Europe’s ‘fixed link’ economic model. Writing in the company’s latest half yearly report, Chief Executive Jacques Gounon said the economic outlook for the next two years ‘remained good’, and would enable Eurotunnel to confirm its objectives.

Half year revenues for the group, which includes the dedicated Le Shuttle Freight link, were 497 million Euros, up three per cent, while the net profit of 30 million Euros was a rise of 20 per cent on the previous year. Eurotunnel also sold GB Railfreight to EQT Infrastructure II, part of the Swedish-based Hector Rail Group, in November 2016.

“Cross-Channel rail freight, which was badly affected by the migrant crisis in 2015 has also continued to recover during the first half of the year, with a 20 per cent growth in traffic,” says the report. It adds that work started on a new scanner on the Frethun (France) site, demonstrated the company’s willingness to invest in the ‘security, efficiency and growth’ of this activity. The scanner, which is costing 6.4 million Euros, will be operated by customs officers from the Douane, France’s customs agency. It will scan freight trains for smugglers and migrants on the move, and is expected to enter service next year.

The group is also continuing with various investment projects designed to increase the capacity and quality of service of its Shuttle performance, including the acquisition of the first of three new truck shuttles in February this year. “This will continue in the second half of the year with the remaining two new truck shuttles entering service in the autumn,” it adds.

On the issue of Brexit, Eurotunnel says the first half of the year did not see ‘any significant impact’ on its operations as a result of the UK’s withdrawal process, but added: “(Eurotunnel)…continues its active monitoring of the situation and its detailed assessment of potential risks that may arise. The tunnel is, and will increasingly assert itself as, a major player in the commercial exchanges between the United Kingdom and Europe.”

The group described as a ‘resounding success’ measures taken to reduce debt to less than four per cent through a refinancing model, which was massively oversubscribed, Jacques Gounon said: “Over the past 10 years, the group has focused its business model on value creation through the quality of service provided. The success of the partial refinancing of the debt shows the confidence of the markets in the strength of this model. The economic outlook for the next two years remains good.”