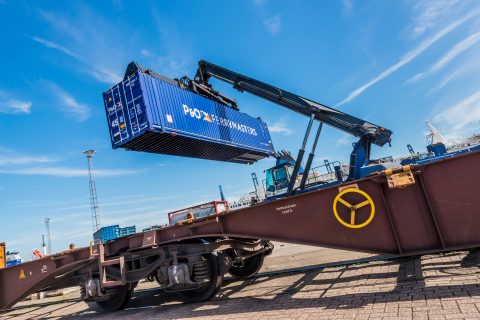 P&O Ferries’ rail freight volumes at its two principal mainland Europe ports, Zeebrugge and Europoort Rotterdam, saw a significant year-on-year rise in the first half of 2017.

In what the company calls a further sign of ‘robust’ UK-Europe trade flow, P&O handled 42,421 units which were being transported from these two key rail hubs across the North Sea to UK’s east coast, up 14 per cent on the previous year’s corresponding figure.

The majority of these units, 30,154, went through Zeebrugge, while Europoort accounted for 12,087. It comes on the back of the company’s recent announcement that it had carried more freight across the English Channel in the first six months of 2017 than in any first half of the year in its modern history. Both sets of figures are particularly significant given the future uncertainties still facing the UK-Europe freight sector in the context of the ‘Brexit’ process.

Janette Bell, Managing Director of P&O Ferries, said: “This outstanding performance at our terminals in Zeebrugge and Europoort illustrates that continental exporters are increasingly using our integrated rail and ferry service across the North Sea for reliable and punctual access to key markets in mainland Britain.

“Once the goods reach our rail terminals on the continent, we offer 98 sailings across the North Sea every week. Our services to Teesport are a point of entry for the north of England and by rail to Scotland, our Hull routes serve the M62 corridor across the Pennines to Manchester and Liverpool, and our ships to Tilbury put exporters within easy reach of London and the M25.”

“With both the British economy and population continuing to grow, we expect increasing demand for this door-to-door service which is ideally suited to the requirements of exporters across the continent of Europe.”

P&O Ferries, in conjunction with with its dedicated logistics division, P&O Ferrymasters, operates integrated multimodal links to countries across the continent including Italy, Poland and Romania. A P&O Ferrymasters-owned rail terminal in the northern Romanian city of Oradea, which will facilitate the onward movement of goods to Britain from the Silk Road, became operational last year.