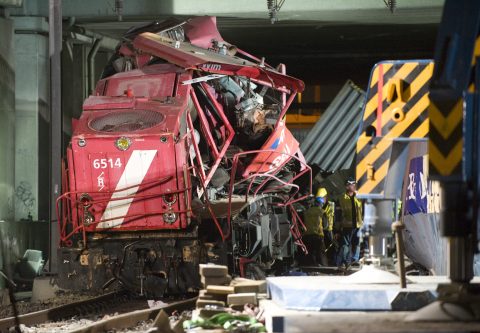 DB Cargo is to appeal a Dutch court’s ruling that they must pay 1.5 million Euros to rail infrastructure manager ProRail for track damage caused by a collision in 2009 in which the DB train driver died. A then DB Schenker train drove through a red light, possibly after the driver became unwell due to a pre-existing heart problem.

The accident, which happened at Barendrecht, resulted in ProRail incurring costs of 2 million Euros to repair the damage caused to the rail infrastructure. DB Cargo has since repaid around 500,000 Euros, but the Central Court of The Netherlands has ruled they must now pay the remaining 1.5 million Euros.

The DB train was travelling from Groningen to a freight yard at Kijfhoek between Barendrecht and Zwijndrecht, while an ERS train was en route from Rotterdam to Warsaw. The DB train passed a red signal at Barendrecht at the same as the ERS was approaching from the other direction, and a collision occurred under the A15 motorway viaduct.

A 2011 report by the Dutch Safety Board had already established that the incident, which occurred on 24 September, 2009, was probably caused by the driver becoming unwell, after an autopsy revealed he suffered from a genetic heart defect. Before the collision the driver had twice attempted and failed to make an emergency stop, but his actions were not detected by the control centre. Evidence of the condition had been noted in a previous medical but no further examinations had taken place. The board recommended more stringent medical procedures be implemented.

However the court ruled that in going through the red signal, the driver had committed a ‘breach of the statutory duty’ and therefore ‘acted unlawfully’ against ProRail. As a result, the court said, the damage ‘must be attributed’ to DB Schenker.

The DB train’s Automatic Train Control system, ATB EG (1st generation), failed to intervene when the train passed the red signal, as it does not operate when a train approaches a red signal at less than 40 kilometres per hour, and it was travelling at 39 km/h. The Dutch Safety Board subsequently found that a modern braking security system, such as ATB Vv, ATB NG or ERTMS, might have prevented the accident.

Jelle Rebbers, Spokesman for DB Cargo, said: “We do not just disagree with the responsibility but also the allocation of certain damage components, such as the cost of delaying the work on the section Rotterdam – Utrecht on weekends. In addition, we reject the claims of the Dutch Safety Board which found that we could have prevented the accident with better security.”

Read the full verdict of the court (in Dutch).

Would you like to receive the weekly newsletter of RailFreight.com? Please fill in your email address here:

Strange verdict .How did they know the Driver was still alive when he went through the red signal ? he could not be acting unlawfully if he was already dead ! It seems strange the Deadmans handle or pedal did not activate to kick in the emergency brake and the train speed was also kept one Kmh lower than the 40 kmh need to kick in the emergency brake as well . With hindsight the Driver should have been removed from Driving with this sort of condition .