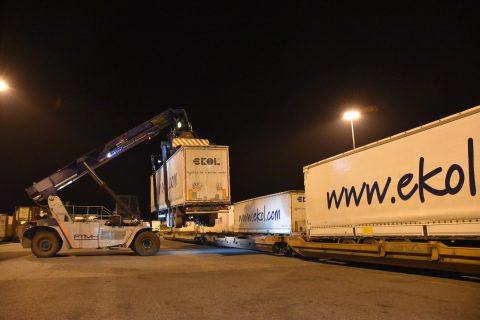 The development of the Baltic-Adriatic and Mediterranean TEN-T Network Corridors has been strengthened with the first long-distance Port of Trieste to Gothenburg freight service. TX Logistik is operating the service for Ekol, and will see containers and semi-trailers transported from Turkey and Greece.

TX Logistik, which is responsible for the entire transport chain from Trieste on the north east coast of Italy, is extending its European intermodal network by starting with one round trip a week. The 552 metre-long train has 16 double-pocket cars and can accommodate 32 loads. Operated in conjunction with Stena Line, which will handle the final leg across the Baltic Sea from Kiel to Gothenburg, the service – spanning 1,360 kilometres and 234 nautical miles – will take around 48 hours.

Located at the intersection between shipping routes and the Baltic-Adriatic and Mediterranean Corridors, the Port of Trieste is a vital international hub for overland and sea trade with the established and growing markets of western and eastern Europe respectively.

Jörg Nowaczyk, Intermodal Division Manager at TX Logistik, said: “The solution we have developed is tailored exactly to the entire supply chain of Ekol. This means that TXL operates not only as an integrator but also effects a large proportion of the traction under their own direction.

“The collaboration with all participating partners and the coordinated schedule ensure short waiting times in the ports and reduce transit times between Turkey and Scandinavia considerably. This also makes the intermodal connection interesting for freight destined for northern Germany and southern Denmark.”

Provided that demand warrants it, TX aims to increase the number of return journeys to two by the end of the year. There is also the potential to expand the destinations reached, with Lithuania and Norway also easy to reach via Kiel, and other ports in the south to potentially exploit.

“Alongside Trieste, the ports of Koper and Fusina offer ideal conditions for us to extend our European network,” added Mr Nowaczyk.

The partnership also further strengthens Ekol’s position, following its recent acquisition of a 65 per cent share in Europa Multipurpose Terminals, which owns the Port of Trieste. This will enable Ekol to increase its intermodal train loading capacity at Trieste to around 10 trips a day. Currently providing services to Turkish and Greek destinations, Ekol hopes to add countries such as Israel and Egypt to its portfolio in the coming years.

Zeno D’Agostino, President of the Port System Authority of the Eastern Adriatic Sea, said: “This project confirms the great railway vocation of the Port of Trieste. Not only are we consolidating the role of the port as a preferential gateway to the market of central and eastern Europe, but we are also poised to expand our catchment area up to the northern part of the continent, reaching Denmark, Sweden, Norway and Finland.”