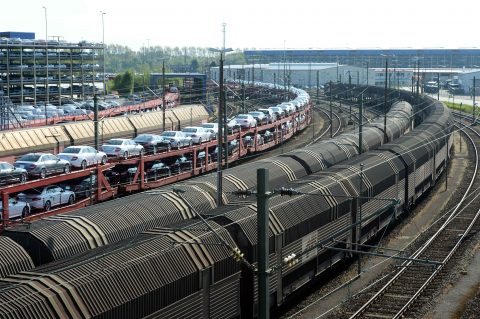 Expanding the railway infrastructures at the ports of Bremen & Bremerhaven are the key priorities for 2017, and should be completed by the end of the year, say the ports’ owner. Outlining the major construction projects being focused on by both ports this year, Robert Howe, Managing Director of Port of Bremen Management Company, described the work schedule as ‘immense’.

“2016 was a busy and successful year for Bremenports,” he said. “Together, our staff of roughly 370 employees ensured that the infrastructure at the world Port of Bremen/Bremerhaven was available for our customers without restrictions round the clock, 365 days a year.

“We are permanently developing the ports – the effort, time and resources required for maintenance of the public port facilities in Bremerhaven and Bremen are immense and will remain so in future.”

Mr Howe said that the ‘most important project right now’ was expanding the Insumer Deich storage track complex at Bremerhaven’s Überseehafen. The number of parallel tracks at the facility, each the length of a full train, will be doubled to 16, inclusive of electrification, at a cost of around 30 million Euros. “The construction work is making good progress and is on schedule,” said Mr Howe.

This latest rail freight infrastructure project is part of a rolling programme of work, and follows the addition of extra tracks and technology for customers using the Kaiserhafen facility, which is used primarily by car-carrying trains. The expanded storage track facilities at Insumer Deich however will be primarily for the transport of containers. The port says that if the weather remains mild this winter, then the new tracks could go into operation by the end of 2017.

Bremen’s railway network covers a total length of 183 kilometres, and with stations at Bremen inland port, Bremerhaven and Bremen Grolland, the port railway serves as a vital link between the hinterland and the transhipment terminals. The tracks also link up Bremen’s freight village and Hansalinie Bremen Industrial Park with the national rail network.

The port’s management company says efficient rail services are a crucial factor for the attractiveness of Bremen/Bremerhaven as a port and logistics location, and that the track infrastructure is therefore being continuously upgraded to cope with the sustained increase in traffic forecast for the coming years. Up to the year 2020, the focus will be on expanding the interim stabling capacities for the automobile and container terminals in Bremerhaven.