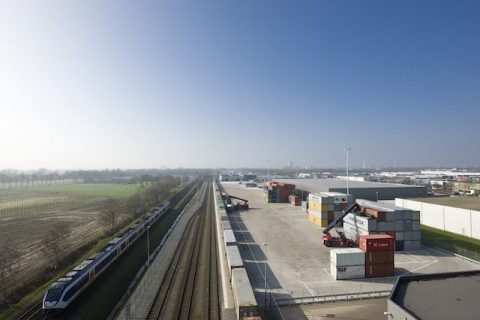 Cargo services between Tilburg in The Netherlands and Chengdu in China could increase to as many as 1,000 trains this year, operator GVT Intermodal has announced. It recently opened a booking office at its Railport Brabant freight hub, and has taken on two Chinese employees to oversee operations.

GVT Intermodal is working closely with the state-owned Chengdu International Railway Services (CDIRS), with the aim of further developing the Chinese Government’s ‘one belt, one road’ economy-boosting initiative, following in the footsteps of the ancient Silk Road trading route.

CDIRS began operating a weekly service between Chengdu city and Railport Brabant in June last year, and it has quickly become a success, employing around 100 people. Chengdu is at the heart of a manufacturing region which houses many logistics providers, and produces goods such as electronics and car & aeroplane components. In September the province of Sichuan received permission from the Chinese government to formally establish a free trade area with Chengdu as its centre, paving the way for an increase in services.

Jie Chen, Vice General Manager at CDIRS, said: “We run 400 trains between China and Europe, each with 41 containers on board. We have connections with Lotz in Poland, Nuremberg in Germany and Tilburg in The Netherlands. Next year we hope to add Moscow and Istanbul, and the goal is to run more than 1,000 trains on this route.”

The Chengdu-Tilburg service covers just under 11,000 kilometres, and takes 15 days. Leaving on a Friday, the route goes through China, Kazakhstan, Russia, Belarus, Poland, Germany and The Netherlands, arriving at Railport Brabant on Wednesdays.

As well as hosting through services to the Port of Rotterdam, Railport Brabant also operates several weekly services to Dusseldorf in Germany and Bratislava in Slovakia. It was electrified last year at a cost of 1.1 million Euros, and today serves customers including DB Schenker, Fuji and Sony. Together with its adjacent Barge Terminal Tilburg, Railport Brabant forms a trimodal cluster that guarantees maximum flexibility and transport reliability.