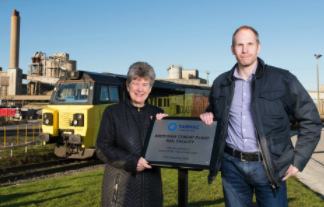 One of the UK’s largest building materials providers has opened a new rail facility that will take 2,500 truck movements off the road every year. Tarmac also says it will be the first time in 20 years that trains are used to transport cement in Wales.

The Aberthaw Cement Plant in south Wales, it says, has a key role in supporting Tarmac’s commitment to enhancing its rail freight capabilities in the delivery of more sustainable infrastructure projects, including reducing CO2 emissions, while also honouring the plant’s commitment to improving the local environment.

The opening of the facility means that bulk cement, which was previously transported by road, will now be loaded onto freight trains and dispatched by rail to the company’s depots across Wales and the south west of the UK.

Chris Bradbury, Aberthaw Cement Plant manager, said: “Reducing our road movements by 25 per cent is a significant achievement and it puts us in an even better position to supply materials to our customers across Wales and the south west in a more sustainable way. The plant has been in operation for over 100 years and we employ 109 people, the majority of whom live within ten miles of the site, so this development demonstrates our commitment to the Vale of Glamorgan.”

Earlier this year Tarmac, which currently moves around nine million tonnes of materials every year by rail, awarded a number of five year contracts to expand its rail freight operations and created new strategic hubs that will expand its nationwide supply into key construction markets.

The latest news was welcomed by Jane Hutt, Assembly Member for Vale of Glamorgan, who officially opened the facility: “It’s great to see this show of confidence by Tarmac in its Aberthaw operations which will positively impact the environment – both locally and further afield,” she said. “Investing in infrastructure is key to supporting economic growth and it is hoped that more people locally will benefit from Tarmac’s support.”

Aberthaw Cement Plant is the only cement works in south Wales. Cement made at Aberthaw has contributed to some of Wales’ most significant construction projects of recent times, including Pembroke Power Station, The Millennium Centre and home of the Welsh Government – The Senedd – both in Cardiff Bay.