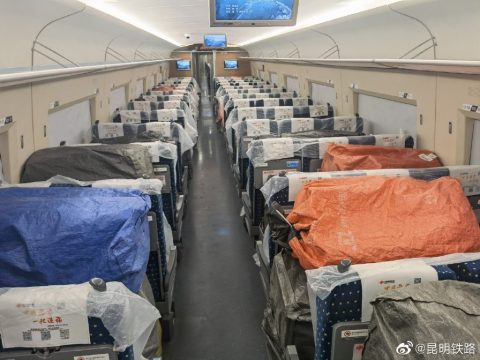 The 14th annual Double Eleven Shopping Festival has come to China once again. For the second consecutive year, goods were also carried on high-speed trains. According to Guangzhou Railway, from November 1 to 20, Guangzhou Railway will arrange 12 daily passenger trains for freight services.

This year is not the first time that the high-speed rail has taken a share of the Double Eleven festival. According to Xinhua News Agency, in 2021, China’s high-speed rail reserved 35 second-class EMU trains without ticket sales every day on Double Eleven 2021, of which 32 high-speed trains were fully used for freight transportation radiating city shuttles between Beijing, Shanghai, and Guangzhou.

The 12 trains provided by Guangzhou Railway this year will reserve some compartments for loading Double Eleven goods. According to reports from Guangzhou Station, the goods currently carried on the high-speed rail are mainly cosmetics and daily necessities. The timeliness of using high-speed rail to run goods is self-evident.

Compared with the maximum speed of traditional railway freight at about 160 kilometres per hour, high-speed rail will double this speed at once. For example, goods departing from Guangzhou can reach Changsha by high-speed rail in just over two hours.

The involvement of China Railway Express

This Double Eleven shopping festival also includes a large number of imported goods. The China-Europe freight train has also joined the transport crew. For example, in October, a batch of LEGO bricks boarded the China-Europe train operated by Cainiao Network from Duisburg, Germany.

This batch of LEGO bricks took up 31 carriages and passed through Germany, Belarus, Russia, and Kazakhstan, reaching the bonded warehouse in Yiwu, China, within 20 days. The LEGO load is ready to be sold out at the festival, as Sun Beibei, general manager of Cainiao Import Supply Chain, commented.

Record-breaking expectations for the Double Eleven

Double Eleven is currently the world’s largest shopping festival, with total online sales exceeding 130 billion euros in 2021. Bain & Company predicts that online sales will be even higher this year. For Chinese consumers and the retail industry, this artificial festival, which was born 14 years ago, is very important.

Many businesses even start preparing for the annual Double Eleven promotion a year in advance. For practitioners in the logistics industry, how to prepare the supply of goods in the early stage and use the China-Europe train to accelerate the transportation of imported goods on Double Eleven is an opportunity and a huge challenge under the huge consumerism.

This article was originally published in our Chinese sister publication, RailFreight.cn