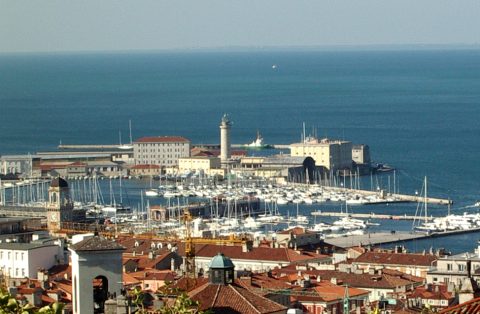 Hungary in Trieste: will it boost Italy’s role on the New Silk Road?

Italian ports can become the sea transportation solution for cargo to and from landlocked Hungary. This is not only attractive for continental traffic, but also for rail freight between China and Europe. This was pointed out by Domenico Baratta from the Italian Society for Import Export (Siiesiie), a Eurasian logistics company based in Italy.

The Adriatic corridor is a popular transport link for cargo to and from Hungary arriving by sea, and this popularity has only increased since the outbreak of the war. “Ukrainians now value transit alternatives, said Agnes Hernád from RailCargo Group Hungary during the RailFreight on Tour summit in Debrecen. “The Adriatic corridor to Hungary played a crucial role in that.”

That the relevance of the Adriatic ports has not gone unnoticed by the Hungarians also became clear with Hungary’s new project for a rail terminal in the port of Trieste. This terminal is expected to function as an import-export platform for Hungary, which does not have an outlet on the sea in its territory. Currently, there are already six to eight daily trains between Trieste and Budapest, number which will increase once the terminal is completed.

Better than the Greek ports

According to Baratta, using rail freight routes to the Italian ports have advantages over the routes to the Greek ports. “The main disadvantage of rail routes from Greece is that they cross non-EU countries, which require more documentation and therefore cause slowdowns”, he pointed out.

Moreover, transit times from Italy to Budapest are quite attractive. As Baratta pointed out, there are daily connections with Hungary from Milan and Trieste with a transit time of roughly three days. He also mentions that a direct rail connection would allow “extending container transportation to the inland of Europe in a regular and reliable way”.

The Adriatic corridor on the New Silk Road

As Baratta pointed out, Italy and Trieste play a significant role in the New Silk Road but are “far from the main train connections with China”. Italy is the fourth largest EU trading partner with China, and strong connections with Hungary could help when it comes to trade via rail between Rome and Beijing.

Siiesiie was among the first companies to implement a service that would transport electric cars manufactured in China to Europe via rail. “We should do and we can do much more and benefit from the train connection with China,” Baratta said, pointing out that all terminals on the New Silk Road are to significantly benefit from similar services.

The Italian Society for Import Export

Siiesiie was established in 2013 to strengthen the links between China and Europe. It offers connections with Budapest from Milan, Trieste, and Koper, and via Budapest to other terminals in Hungary, the Czech Republic, and Poland. Siiesiie offers rail freight services between China and Europe with transit times revolving around 20 to 25 days. The company works with various ports and terminals throughout Europe.