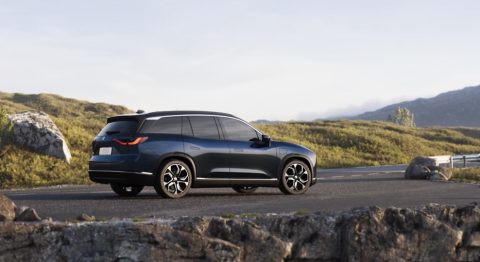 Xi’an, Zhengzhou and Chengdu all launched new China-Europe rail services in October. Their common denominator? New energy vehicles (NEVs) occupy the train capacity and provide a glimpse of Silk Road cargo trends. The new cargo type is quickly taking over the supply chain since the Chinese Ministry of Commerce allowed its transport by rail in early September.

On these trains, one can see multiple automotive brands, some known in Europe like Smart, Volkswagen, Honda, Ford, Polestar and NIO, and some new names in European ears like Hongqi, Xpeng and Lantu. What all those cars have in common is that it is the first time they are transported by rail on their way from China to Europe.

One of the very first new energy vehicle rail services was set up by the Xi’an International Land Port Group Multimodal Transport Company to transport Smart #1 cars to Duisburg in Germany. The train arrived in Germany on 15 October, and the vehicles were available to the customers nine days later after customs clearance processes were completed. The new energy vehicles train transited via Alashankou in Kazakhstan, Russia, Belarus, and Poland before reaching Duisburg in 16 days.

On 20 October, it was Chengdu’s turn to dispatch a train carrying new energy vehicles for the company NIO. The train will take around 15 days to reach its final destination in Hamburg and will transit through Khorgos. This is the first export of domestically produced NEVs to the European market by rail since NIO cars were transported by sea in the past.

The car brand that recently entered the Dutch market is targeting to expand its services in the broader Benelux and Scandinavian region and uses Germany as its entry point to Europe. The Chengdu International Railway Express, responsible for setting up the train, says it will launch regular services to Europe according to export demand. For October, there will be two weekly trains running carrying cars for Volkswagen, Honda, Ford and Polestar, apart from NIO.

The third China-Europe train that will carry NEVs does not deal with well-established brands in Europe. The car companies Hongqi, Xpeng and Lantu that onboarded it are currently attempting to make an opening to the European market. For this reason, they use the westbound train connecting Zhengzhou with Minsk in Belarus, transiting via Alashankou. The Zhengzhou International Land Port Company, responsible for the service, did not clarify whether Minsk is the train’s end destination.

Yet, it said that to set up this special NEV train, it cooperated with the Shanghai Huanshijie Logistics Co. to ensure proper container packing, transport organisation and scheduling. Understandably, the world of NEVs is new to rail and needs some logistical expertise from companies who already do it.

All transport companies involved in the new services agreed on one thing: that new energy vehicles are here to stay on the Eurasian railway supply chain. Apart from that, though, NEVs will be highlighted in the 2022 edition of the European Silk Road Summit taking place in Duisburg on 7 & 8 December.

The time for the annual flagship event is approaching. The 2022 edition will take place in the ‘Mecca’ of the European Silk Road, where it all started and where a new era for new energy vehicles seems to begin.

On 7 & 8 December, rail professionals from the Eurasian corridor will gather for a monumental two-day event full of trending topics and networking. Do you wnat to secure your ticket? Then don’t miss time and buy your tickets here after checking the programme.