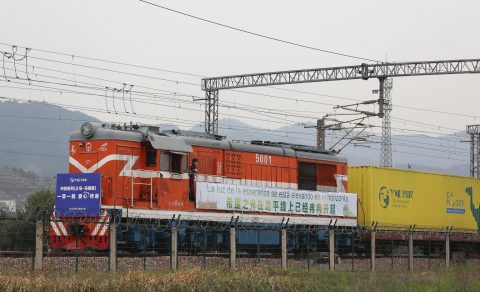 The Chinese e-commerce hub of Yiwu has opened its doors again for business after a lockdown period of more than two weeks. For rail freight this means a backlog of cargo that needs to be shipped out, with many packages already on the move.

Yiwu is also known as the e-commerce hub of China, with especially LCL shipments boosting the figures. This is a large part of the business for China-Europe trains, but also trucking is a popular mode of transport. Throughout the lockdown that started on 2 August and lasted till 18 August, trucks were unable to pick up or drop off merchandise. This has caused a huge backlog, which now needs to be cleared.

There is a role to play for rail freight. It must be said that trains never stopped running, as is usually the case during lockdowns in China. Train traffic involves less human interaction and is therefore considered relatively safe. These trains have been able to ship out whatever was available or stored in the warehouses.

However, without the first or last mile carried out by trucks, the supply chain has experienced a hick-up, which is expected to take several weeks to be straightened out. Apart from the train, e-commerce is shipped out from the port and by truck, both strong competitors to rail freight.

According to the Chinese state-owned CCTV, a total of 66 trains departed the city throughout the lockdown period, which indicates an increase of 59.4 per cent month-on-month. After the outbreak, the railway platform Yixinou launched an emergency plan to ensure normal train operations. From 2 till 16 August, Yiwu maintained a stable operation of 4 to 6 trains per day.

Yiwu was one of the first cities to be connected to Europe on the New Silk Road. Trains run back and forth to big hubs as Duisburg, Hamburg and Malaszewicze, but also to and from Madrid, known to be the longest New Silk Road connection.