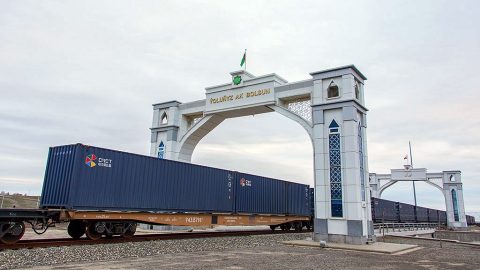 Published on 05-07-2022 at 12:44
Container train from China crossing the border between Turkmenistan and Iran, source: Embassy of Turkmenistan in China

The data regarding the first half of 2022 was made available by the China State Railway Group Co., Ltd and considers the China-Europe Express, the rail freight trains between Europe and China.

Despite being considered as a positive growth, these numbers reflect a significant decrease in growth when compared to previous years. In 2021, freight train trips between Europe and China increased by 22 per cent and TEUs grew by 29 per cent. Going even further back, in 2020 the growth was respectively 50 per cent and 56 per cent. 2020 can be considered as an exceptional year, considering that the start of the COVID-19 pandemic positively influenced rail freight traffic between China and Europe.

More specifically, transported goods from China to Europe sharply rose during 2020, according to ERAI. For 2019 the number of freight train trips rose by 29 per cent and TUEs by 34 per cent, showing a similar trend with 2021. 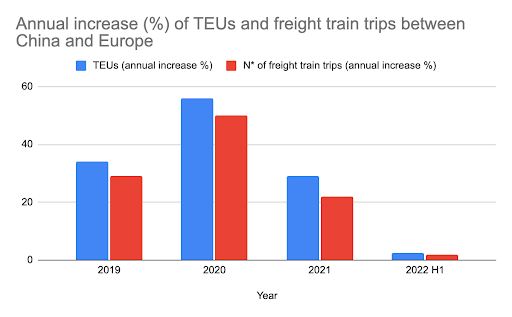 As reported by Onno de Jong, transport consultant at Ecorys, the available numbers do not always paint a coherent picture. This is because they come from various sources (ERAI, China Railway Express, RZD) that may exclude or include different data.

It needs to be mentioned that this decrease is specific to the trades between China and Europe. In fact, the routes involving Central Asia are currently flourishing due to an increase in the volume of goods moved. However, recent congestion in China suggests that the volume of rail freight transportation to Europe is rising again.

The slowdown of this growth can be connected to the consequences of the war in Ukraine. Many companies have decided to stop their businesses with Russian Railways on moral grounds. By opening new routes that do not require to pass through Russia and Belarus, they are hoping to offer viable alternatives to their customers. De Jong mentions the weakening economic climate, namely lower consumption, as one of the pre-war factors that can explain such a drop in growth.

These routes cannot handle the higher volume of freight traffic, therefore many companies went back to shipping goods via sea. Ships are, however, less efficient. Maritime transportation takes longer than rails and ships need to be fully loaded before they leave the port. Moreover, the sanctions on Russia by the EU and the increase in the costs of transportation may play a role in the slower growing pace of 2022.

On the other hand, this trend could change if bigger companies decide to do business with Russia again. In fact, it is likely that, if the war continues, companies and customers will decide to choose business over morals, with smaller companies following suit.