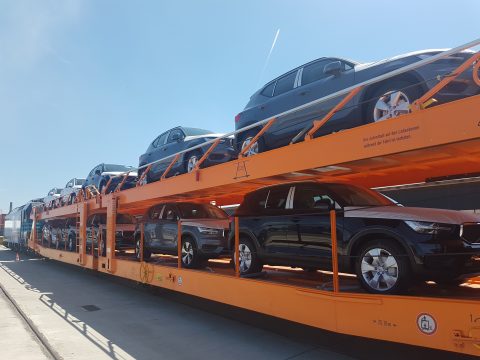 Luxury cars take the high road, or sea to China since war in Ukraine

Large car manufacturers that were once solid customers of rail freight between China and Europe are withdrawing from the New Silk Road. Apart from BMW and Audi, Porsche has stopped shipping its finished products via the Eurasian corridor.

Luxury cars have long been among the high-value products that were typically transported by rail. The New Silk Road lends itself for high-value goods due to the higher price compared to sea shipping. The conditions for safe transport are guaranteed by the industry, which has invested in various loading material, ranging from double-stack open wagons to reefer containers for the transport of vehicles.

However, several large customers now seem to return to sea shipping, if not partly. BMW reported to Global Times that its current transport model is by train to the German port of Bremerhaven, and from there by ship to China. Audi was reported explaining that it is using trucking and sea freight via the Middle Corridor passing Romania. This route crosses the Black and Caspian Sea, but is typically a rail freight route, gaining popularity since the war in Ukraine.

Volvo, another big customer, already withdrew from the New Silk Road before the war started. A spokesperson cited the dramatic cost increase for a relatively low-quality service as the reason. This was in October last year, when the prices on the New Silk Road were exorbitant and capacity limited.

The car manufacturers are not alone in withdrawing from rail, or at least the main route of the New Silk Road. Customers as Ikea and HP withdrew from the New Silk Road as well. The transport though Russian territory is too risky, is often not covered by insurance companies, or is not desirable on moral grounds.

BMW earlier said that it would halt the export of cars to Russia and cease production in the country. Similarly, Audi adjusted its manufacturing operations in Hungary, as the transport route for vehicles produced here would inevitably lead through Ukraine.