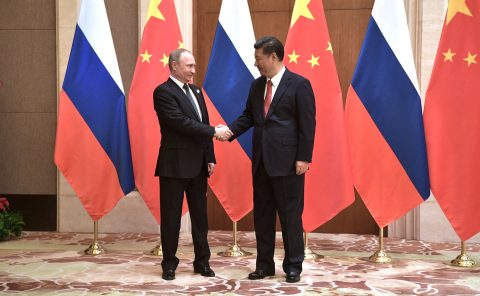 As the whole world closely watches the developments on the Ukraine-Russia frontier, the rail freight industry waits for China’s reaction to see how things will develop on the New Silk Road. The Chinese President Xi Jinping and Russian President Vladimir Putin had a phone conversation just a few hours ago, with Xi explaining that the conflict is against China’s geoeconomic interests.

Chinese President Xi Jinping has recently underlined Ukraine’s importance for China’s BRI. In a note he sent to the Ukrainian president in January 2022, he highlighted how important the “development of the China-Ukraine strategic partnership was to his country and the Silk Road, respectively.

At the same time, the relations between Russia and China are pretty well. On a political level, the two countries are backing each other, while Russia is a crucial component of the New Silk Road, with most of the volumes passing through there.

“China supports Russia and Ukraine to resolve the issue through negotiation. China’s basic position on respecting the sovereignty and territorial integrity of all countries and abiding by the purposes and principles of the UN Charter is consistent,” commented Xi while talking with Putin.

Despite Xi not referring to a Russian invasion in Ukraine and framing it as military intervention, and despite the Chinese Foreign Ministry spokeswoman openly opposing the US and EU sanctions on Russia and questioning their effectiveness and motives, China seems willing to work as a ‘fire extinguisher’ in the conflict between Ukraine and Russia.

In fact, Xi said to Putin that the countries should “abandon the Cold War mentality” and find a solution through negotiations. China has a lot at stake due to this conflict. Sanctions, for instance, affect it too. Hua Chunying, the spokeswoman for the Chinese Foreign Ministry, stressed that “when handling the Ukraine issue and relations with Russia, the US and EU must not harm the legitimate rights and interests of China and other parties”.

Apart from risking losing two crucial partners for its BRI project, China will also suffer indirectly from the imposed sanctions that will not allow it to expand its New Silk Road reach anymore. The financial losses from past investments that will be in vain and the restrictions in global supply chains and trade are not something China wants to deal with. As a result, Xi Jinping could indeed consider seriously intervening and assisting resolve the crisis.