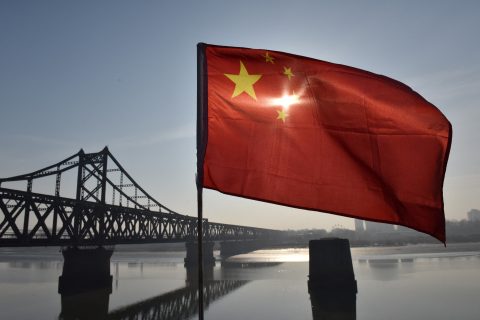 Published on 21-01-2022 at 10:04
The Chinese flag flies on the Yalu River Broken Bridge, with the Sino-Korean Friendship Bridge, and the North Korean city of Sinuiju behind, in the border city of Dandong, in China's northeast Liaoning province on February 23, 2019. North Korean leader Kim Jong Un's train is expected to cross the Friendship Bridge on a journey across China before Kim's summit meeting with US President Donald Trump in Vietnam on February 27. GREG BAKER / AFP

UPDATE – The border between China and North Korea is officially reopened for rail freight traffic. This was confirmed by the spokesman of the Chinese Foreign Ministry Zhao Lijian at a press conference on 17 January 2022. On that day, a train loaded with emergency supplies from China arrived at the North Korean border town of Sinuiju.

Having observed the train arrival, there was speculation over the border reopening by several media, as rail freight traffic had been suspended since the start of the pandemic, apart from a eight-day revival in November. The single journey could be a trial, some said, still anticipating to hear that it was only temporary. But, in the days that followed the confirming words that were spoken at the press conference made it to the news. Several Chinese news websites have reported about the resumption of rail freight traffic between China and North Korea.

On Monday morning, a loaded freight train from China entered North Korea, and it returned to China the same morning with empty wagons. This was reported by several media outlets. It is not yet clear whether more trains will follow, but it is the first train to make it through since the short-lived revival of rail freight activity in November, and a two-year period of complete closure before that.

A Chinese locomotive pulled a train full of goods from the Chinese border city of Dandong to the North Korean border town of Sinuiju this morning. According to the North Korean website NK News, the train carried around a dozen fully loaded wagons, and Chinese traders are eagerly waiting for more capacity on the train.

According to Reuters, this departure could very well mean the restart of rail freight between China and North Korea. “Chinese brokers said they expect the resumption of regular trade with North Korea as soon as Monday”, it reported today. “My business partner in North Korea told me on Friday that the land border will reopen to cargo freight on Jan. 17″, it cites a Chinese commodities trader in the border town of Dandong.

On 1 November 2021, the railway freight service between Dandong and Sinuiju saw a short revival of eight days, after which the service was put on hold again. A new confirmed case of corona appeared in the Dandong area, in this was reason for Dandong’s pandemic prevention policy to interrupt the railway trade once again.

Before that, rail freight activity had been suspended for two years, or since the start of the pandemic. As China accounts for 90 per cent of North Korea’s annual international trade, this pause has stretched North Korea in terms of food, medical equipment, and even currency issuance. In 2021, the food gap reached 860,000 tons this year.

Not unthinkable, but not confirmed

It is therefore not unthinkable that rail freight activity is set to resume, despite the current threat of the Omikron variant. North Korea is currently building quarantine facilities at the border, indicating an intent to resume rail freight between the countries. In China, traders are gearing up to load more of the much demanded goods, in anticipation of the next train.

According to Reuters, the official re-opening of the border has not yet been confirmed. NK News cites an unnamed source in North Korea that the latest shipment is to test new quarantine facilities in the DPRK border city of Sinuiju.