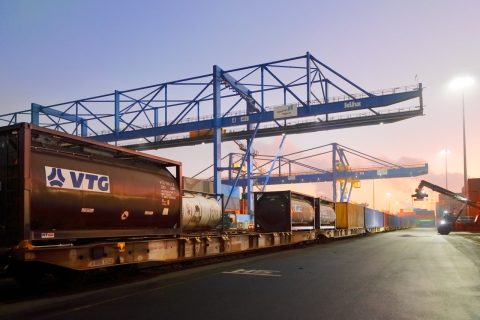 With the first chemical train arriving from China in Duisburg this week, the starting signal was given to the COSCO VTG China-EU chemical train business. The train carrying 28 ISO tanks of non-dangerous liquids is certainly not the last, VTG has revealed.

On Sunday, the train rolled into the Rhine-Ruhr terminal of Duisburg, the biggest inland harbour in Europe. The shipment originates from Changchun, capital of the province of Jilin in the north of China and made a 12,000-kilometre journey on rail.

“We are happy to share that our first ISO-tank train coming from Changchun arrived yesterday at Duisburg and marked the official prelude of COSCO VTG’s China-EU chemical train business. Many thanks to our strategic partners who have supported VTG in achieving this”, the company said on Monday.

According to VTG, the rail transport of ISO tank containers on the New Silk Road offers a viable alternative to sea shipping, with a “trouble-free point-to-point supply chain”. “Regular chemical transports by rail are opening up an important new business area for VTG in cooperation with COSCO to supply customers with even safer, more reliable and competitive services.”

Chemicals on the rails

However, the journey is not without hurdles. There are many challenges faced by the industry, as the majority of terminals in China still pose restrictive requirements on the transport of tank containers. This results in a lot of paperwork, which varies depending on the point of entry. The collection of the right paperwork can take up to a month, said Alberto Grisone from Hupac, which also carries tank containers on the New Silk Road.

Asked about the transit time of the journey, VTG explained that indeed there are still many procedures to be harmonised. In a comment on Linkedin it wrote: “The train started on Nov 21 in Changchun/China. As this was a test train, many processes were not standardised yet, e.g the Chinese-Russian border terminal handled tank containers for the first time. Unfortunately, there were also weather-related time delays as the train came into a blizzard. However, we and our partners are quite happy with the end result.”

In September 2021, VTG and Hupac set up a new liquid rail service between Ludwigshaven and the Chinese city of Lanzhou via the main Eurasian route, Belarus-Russia-Kazakhstan. It also tested the route via Manzhouli, but the main route has the most attractive transit times, Grisone concluded.

Grisone also spoke about the transport of liquid cargo at the European Silk Road Summit, where he pleaded for more harmonisation of the requirements for non-dangerous chemicals in China. “There is a potential of 2 million TEUs per year, which means 24.000 block trains per year. We ask China to accept all the ISO certificates of any certified tank container, to open up all terminals for tank containers and enable blcktrains carrying tank as well as regular containers.”

Similar statements were made by Samer Ghandour from BASF. “As long as there is no standardised approach to this segment of the industry, regular chemical trains on the New Silk Road remain something of the future”, he said at the same summit.