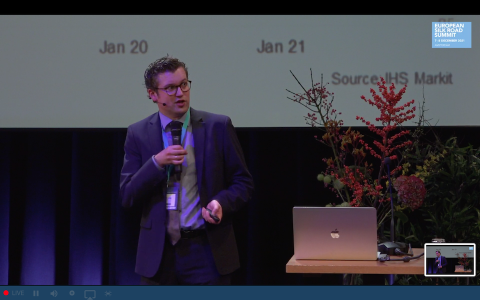 Is rail the saviour of global supply chains?

While the Covid-19 crisis still taints the global economy and supply chain and massive port congestion insists worldwide, rail could be the gamechanger that saves the day and keeps transport flows intact. Could that be the case? Or does rail transport need to overcome more issues to succeed in this?

In his keynote speech during the European Silk Road Summit 2021 in Amsterdam, Onno de Jong from Ecorys drew the picture of the global supply chain for the past year, the challenges, the possibilities and the expectations for the year to come. As he highlighted, 2021 so far looks like a terrific year, and rail could indeed have the “role of the saviour”. However, there are some traps to be avoided.

“Yes, rail can save supply chains!”

The numbers from 2021 show that “the volumes are there and that it has been a good year”, explained de Jong. Specifically, sources like ERAI and RZD show that there has been substantial growth on the New Silk Road routes passing through Kazakhstan and Russia. ERAI provided numbers showing a 30 per cent increase in volumes through Kazakhstan between January and September 2021. The total volumes via this route are equivalent to 459,000 TEUs.

On the other hand, RZD’s numbers concerning the Russian route are equally encouraging. RZD found that volumes through Russia increased by 40 per cent for the same period, which means that they are equal to 782,000 TEU. Taking these numbers into account, “it is fairly likely that we will reach the milestone of over 1 million TEU between China and Europe this year”, highlighted de Jong.

At the same time, the fact that big market players like Maersk and MSC want to maintain their ‘emergency’ overland services like the AE19 (Maersk) and Taiga (MSC) rail connections is indicative of the power that rail and the New Silk Road acquire. These services were launched to respond to the Covid-19 crisis but will stay here for the future. “Ocean carriers investing in rail is the most important indication that rail is viable”, said de Jong.

“…but be aware that there are still unsolved problems.”

Nevertheless, rail still has many kilometres to cover before dominating the global supply chain, if it ever does. For instance, Eurasian rail transport faces persistent problems that remain unsolved despite its phenomenal success. In 2021, congestion and bottlenecks were “the name of the game”, as de Jong said. Indeed, congested border crossing either due to higher than expected traffic or strict Covid measures monopolised the interest of the New Silk Road.

What will the future bring?

Regarding the coming year, de Jong explained that it will be characterised by four trends and two questions to be answered. First of all, the situation will remain the same concerning the ocean tariffs, which are not expected to reduce in the short run. The second pillar that will influence the market is the switching roles and integration of companies that now try to acquire their own assets and set up their own business units in all different transport modes. This will lead to increased competition.

Moreover, inflation and higher electricity prices will have a crucial role in shaping the global supply chain. However, there is some positive news from the geopolitical field since there are indications that relations between the west and the east are cooling off and opening the way for better synergies.

Finally, the two questions that need to be answered concern rail: the first one is what role will rail have in the EU’s Global Gateway Initiative? Will it become a tool to launch a project equal to China’s BRI? The second one concerns the usefulness of new routes and border crossings to bypass heavy congestion on the New Silk Road. Do new alternatives help, or should traditional routes be optimised? Time will show and maybe the European Silk Road Summit of 2022 will be the place to assess all the developments.