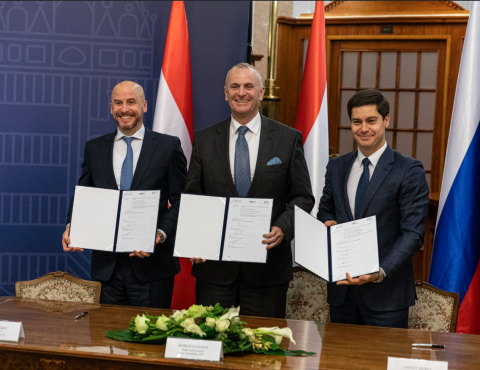 Russia, Hungary and Austria have formed a joint venture that will take the role of freight forwarder and logistics provider on the New Silk Road. The partnership consists of Russian Railways Holding, CER Cargo Holding (Hungary) and Rail Cargo Group (Austria) and was signed on Tuesday 14 December in Budapest.

The focus of the newly formed team will be on cargo transportation from Chinese provinces to South Europe and Balkan countries, through Russia and Hungary and backwards. The route via Ukraine will be of particular importance, as this route serves that particular part of Europe on the Eurasian corridor.

“Together – as three strong partners and with support from politics – we will make rail transport on the New Silk Road even more attractive. Specifically, we will transform the route via Ukraine and Hungary into a second, major axis leading to new capacity, fast transport times and efficient onward distribution in Europe”, said Clemens Först in a Linkedin post.

Hungary back on the map

Also in Hungary, the connection to and from China via Ukraine is an important point on the agenda of politicians and the industry alike. All eyes are currently on the border area of Záhony, which was once a lively border crossing with high rail freight volumes, but has been neglected for the last 30 years. With the new terminal East West Gate and infrastructure upgrades, this is set to change.

“Our goal is to establish a modern system of cross-border connections in Central Europe. By connecting the centres of the regions to each other, we will be able to give a boost to our economies, but also support the evolution of commercial connections. It is imperative that the flow of traffic between us and neighbouring countries becomes easier and faster. It requires a coordinated implementation of inland and also cross-border international projects”, said Levente Magyar, deputy minister of Foreign Affairs and Trade of Hungary in an interview with RailFreight.com.

An important role to play is the new terminal, logistics experts have agreed. The East West Gate terminal, which will be operational in Spring next year, could in theory be the largest intermodal terminal of Europe, if infrastructure upgrades in Hungary are completed as planned. The once neglected area of Záhony could then become a new transhipment hub for Eurasian traffic flows to and from Southern Europe and the Balkans.

“The Northern European freight hubs (aka. “rail-to-rail inland ports”) between Asia and Europe have nearly reached their maximum capacity. Therefore, the EU is in need of this cooperation with Ukraine to reopen the Southern freight corridor towards Central Europe and the Balkans”, said Magyar.

Joint ventures and their strength

Joint ventures are not uncommon on the New Silk Road. The bets example is that of UTLC ERA, a venture of Russian Railways, Kazakhstan Railways and Belinertrans, the railway company of Belarus. As these are the most important transit countries on the main route between Europe and China, their cooperation is crucial. As a joint venture, UTLC ERAt transports 90 per cent of all transit freight between China and Europe.

“It would not be a bad idea if a similar cooperation was formed in Europe; a European UTLC”, suggested the CEO of the company Alexey Grom At the European Silk Road Summit, which was organised on 7 & 8 December in Amsterdam. It now looks like these words of advice did not come out of the blue.