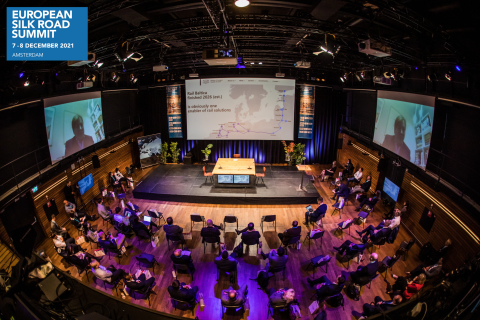 8 takeaways from the European Silk Road Summit in Amsterdam

The quality of the New Silk Road should go up, the prices and transit time down. The subsidies are no longer needed, the route is already congested enough. These are just a few of the conclusions drawn at the European Silk Road Summit, held on 7 & 8 December in Amsterdam.

Every year major players along the New Silk Road gather at this industry event, to draw the balance of the current year and look at the possibilities of the year to come. We have gathered the eight most important news facts or conclusions that were shared during these two days.

The volumes on the New Silk Road are always a hot topic around this time of year and as keynote speaker Onno de Jong rightfully pointed out, there are several figures going around. The transport consultant from the Dutch firm Ecorys chose to share the figures of the ERAI index, based on the main routes via Kazakhstan and Kaliningrad and those of RZD, based on the routes via Russia.

The volumes on the main routes via Kazakhstan and Kaliningrad witnessed growth of 30 per cent in the first nine months of 2021; ERAI reported traffic volumes of 459.000 TEUs. RZD reported an even higher growth rate of 40 per cent, with 782.000 TEUs transported in the first nine months of 2021. These figures overlap, de Jong points out, because the routes via Russia include some of the routes via Kazakhstan. But he also pointed out that based on these figures, it is very likely that the 1 million TEUs milestone will be reached by the end of the year.

Another topic that returns to the discussion every year is the subsidies. This year would have been the last year that subsidies from the Chinese government were in place. But, as we found out on the first day of the conference, nothing is less true. The subsidies will continue for another year.

This was decided by the Chinese government considering the ongoing pandemic, said Jacky Yan from New Silk Road Intermodal in a video message to the audience. However, 2022 is considered by industry players as the last year that subsidies at a central level are in place in China. And this is OK, as the corridor can do without, agreed CEO’s as Alexey Grom (UTLC ERA) and Uwe Leuschner (FELB).

When the audience was asked to think of one word that characterised the New Silk Road in 2021, the word that was most frequently used was ‘congestion’. High traffic volumes in combination with stricter border procedures or even closures resulted in congestion on every route, without exceptions. Not just the main border crossing, but also alternative gateways as Kaliningrad and Vladivostok experienced significant congestion.

As a result, transit times saw a significant increase in 2021. On the broad gauge section, which entails the route through Belarus, Russia and Kazakhstan, the transit time went from a record low in the first half year in 2020 (4.96) to a record high in the same period this year (6.84). This is far from the target that has been set for 2024: 3.5 days.

The route via Ukraine has gained a lot of popularity over the years, and also this year there was a lot of talk about this possibility. The timing of the current route closure could therefore not have been worse, and the desperation of the parties involved was clear.

Just a week before the conference started, transit traffic through Ukraine came to a halt due to construction works. Traffic through Ukraine to the Polish border was stopped starting on 30 November. At the time of the conference, traffic to the Slovakian border was still possible, only to be stopped a few days later. “We are urging Ukrainian Railways to open up this route”, said Wojciech Grzesiok from TransContainer in a pledge to the railway company.

Staying in Ukraine, another important update was shared by Yulia Kosolapovafrom RZD Logistics. The electronic seals that are needed to transit Russian territory are now available at the Ukrainian border with Russia as well.

Earlier, RTSB had indicated that although the seals were available at some border crossings, they could not be applied at the border point of Belgorod, which is the point of transit for its eastbound trains. These are now available, and once all administrative conditions have been met, eastbound trains via Ukraine can depart.

6. Through Russia in 7 days

Kosolopova came with more good news from Russia. “By 2024, 200 billion rubles (2.4 billion euros) will be invested in the container transit development subproject Transsib in 7 days”, she announced. This project aims to reduce the delivery time of containers from the eastern to western border of Russia to a week from today’s 11-14 days. Moreover, this should encourage an increase in traffic volumes.

Apart from the Trans-Siberian corridor, Russia is also heavily investing in the Northern Sea Route, which touches upon the Arctic seaports of Russia and forms a detour away from the busy inland corridor. “This investment will amount to RUB 716 billion (8.6 billion euros)”, said Kolosopova.

“But Russia is also investing in the modernisation of the Eastern Polygon in the Russian territory: an investment of 850 billions rubles is planned for the Trans-Siberian and Baikal–Amur railways.”

Finally, a general consensus was reached about one thing: there is a need to put quality over quantity. Considering the long transit times and congestion on the corridor, it is time to focus on reestablishing the quality of the corridor, several industry players agreed. “This means less focus on new routes, and more on improving our current services”, said Wolfgang Rupf from RTSB.

An impressive gesture was made by the Chinese platform company from Xi’an. Starting from next year, KPI assessments will be conducted towards European clients, in order to assure good transit times, revealed Xiao Zhang from Xi’an International Inland Port Multimodal Transportation. “We will need to do more to provide high-quality services.”

We also looked back at the European Silk Road Summit in RailFreight Live last week. You can watch this broadcast below.