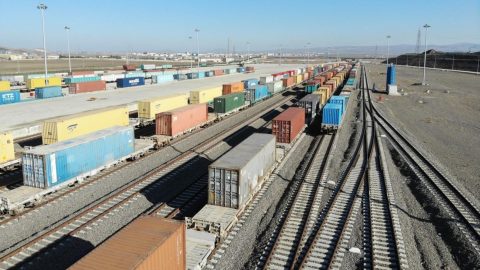 The Turkish minister of transport and infrastructure, Adil Karaismailoğlu, announced that his country will increase rail freight investments by 60 per cent. The development results from the growing traffic in the Baku-Tbilisi-Kars (BTK) railway line and the recently established Kars Logistics Centre.

In recent years Turkey has invested a lot in the BTK line to boost traffic via the Middle Corridor. Constructing and operating the Kars Logistics Centre was part of the government’s policy to attract more traffic from the New Silk Road via Turkey.

The plans seem to pay off so far, but Turkey wants more. Specifically, Karaismailoğlu mentioned that Turkey aims to shift “30 per cent of the volumes passing through Russia and the Northern Route to the Middle Corridor via Turkey”.

The BTK railway line has reached an important milestone. Data shared by the Turkish transport minister show that the route has already seen 1,419,000 tons of cargo transported so far and a total of 1,262 trains and 26,214 containers. Despite that the Middle Corridor does not only pass via Turkey, the Mediterranean country aims to monopolise it both with transit trains and dedicated services between Turkey and China.

Kars Logistics Centre in the spotlight

A strategic component in this attempt is the Kars Logistics Centre right at the heart of the BTK line. The facility was constructed with governmental funds to facilitate Eurasian traffic. It covers an area of 400,000 square metres and has a capacity of 412,000 tons. Most importantly, it has 19 railway lines able to accommodate multiple trains every day.

Until now, the logistics centre has received 349 trains and has handled 417,000 tons of cargo in total. Has it accomplished all the promised goals? Not yet, but it proves Turkey’s determination to become more important in the New Silk Road.

It is essential to underline that Turkey’s whole attempt focuses not only on adding the country to the New Silk Road map but also on changing the status quo and attracting the main traffic flows passing through Russia. Will it be successful?