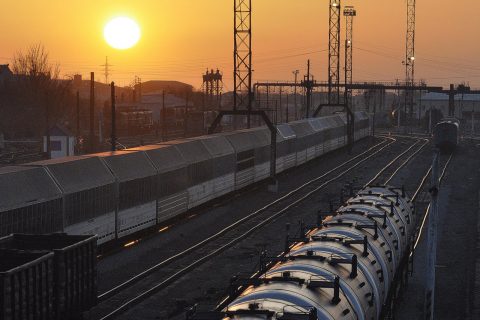 A test shipment of empty cars using only electronic consignment notes has been carried on the broad gauge section of the New Silk Road. The train left Brest on 9 November, and made it to the Chinese border of Dostyk/Altynkol. It was operated by UTLC ERA.

The electronic consignment note is a replacement of paperwork that is required for international rail freight operations. It is set to be a gamechanger for the rail freight industry, as it will make operations more efficient, and thus faster. There are already several sections on the New Silk Road where paperless travel is possible, but a lot depends on the inclusion of all parties and countries involved.

“The competitiveness of an international logistics chain depends significantly on the reliability and predictability of transport, which in turn is determined by the efficiency of data exchange, the timeliness and convenience of the information received by the transport participants, as well as the reliability of this data.

“Thus, it is no longer just a question of developing transport routes, but of developing digital transport routes. The electronic consignment note forms the basis of this process. The transition to electronic consignment note traffic in the 1520-mm track gauge area will provide an additional incentive to promote paperless technology along the entire China-Europe-China route”, says CEO of the operator Alexey Grom.

Electronic all the way?

There are still steps that need to be taken before the electronic consignment note can be applied on the entire journey. This is because for every section on the route, different rules and legislations apply. Moreover, the electronic version may be accepted by the companies involved, but are not always accepted as a legal form of documentation in all territories involved.

According to Grom, we are moving towards this development. The company says to take “further steps in the transition to an end-to-end electronic consignment note format for the shipment of freights, both within the territories of the EAEU member states and in the future along the entire China-Europe-China route”.

Russia seems to be one of the most forward-thinking countries in this development. Russian Railways (RZD) launched the Intertran project in September 2019, which is aimed at introducing the electronic consignment note for container transportation, especially for transit traffic from the Asia-Pacific countries including Japan and South Korea to Europe.

There are some intermediate results of the mentioned project. The Far Eastern Railway, RZD’s branch in the region with the same name, increased the share of containers, which are processed digitally, from 9 per cent at the end of 2019 to 74 per cent in July 2020.

The Russian enclave of Kaliningrad was also the transhipment hub where the first all electronic multimodal freight operation was handled. This was already two years ago: a train from Xi’an was reloaded on a vessel in Kaliningrad, to be shipped to the German port Mukrain. The operation was carried out with a single CIM/SMGS waybill.

Do you want to know more about the consignment note on the New Silk Road? On 7 & 8 December the European Silk Road Summit takes place in Amsterdam, the Netherlands. Platon Guryanov from Russian Railways will provide a workshop titled ‘Common consigment note: Legal framework of railway carriages in Russia’. Interested? You can have a look at the programme here. Or, you can register here.