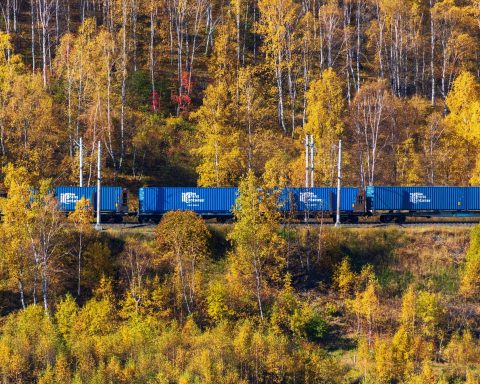 TransContainer puts rail at the forefront of intercontinental transport once again. This time it connected Korea to Poland via Russia and Ukraine. The new train service was launched in cooperation with Korean Pantos Logistics and Polish PKP LHS.

The latest addition in TransContainer’s services breaks records. It is a block train carrying sixty 40-foot containers loaded with electronics, car parts and consumer goods. What is unique about it? The train runs on the world’s longest wide-gauge route for eleven thousand kilometres. The single gauge trip will allow the train to save time since no transhipment processes will take place until reaching Poland.

After connecting Korea with Germany, TransContainer put Poland on its connections map too. With a regular multimodal service, it connects the Korean port of Busan by the sea with the Russian far east port of Nakhodka. From Nakhodka, an express train will travel via the Trans-Siberian route until reaching the Suzemka-Zernovo border-crossing point with Ukraine. After crossing Ukraine, the train will reach Poland, specifically Slawkow, via the Izov-Hrubieszów border-crossing point.

The train is travelling along the Trans-Siberian route, while the whole trip will last around 15 days. As mentioned above, the relatively fast transit time is due to the lack of reloading procedures along the route. The train will travel intact between the departure and arrival destinations. In the coming months, the service will operate every week.

The choice of Ukraine is not related only to the shared track gauge with Russia. Instead, the border crossing to enter European territory played a more crucial role. TransContainer preferred Ukraine instead of Belarus as an entry point because the Belarussian border is currently very congested.

As a result, the company decided to diversify its delivery corridors to Europe, and Ukraine was not the only alternative. “The new route added up to the regular multimodal service from the countries of Asia-Pacific region to Europe via the port of Kaliningrad launched in September,” explained the company.