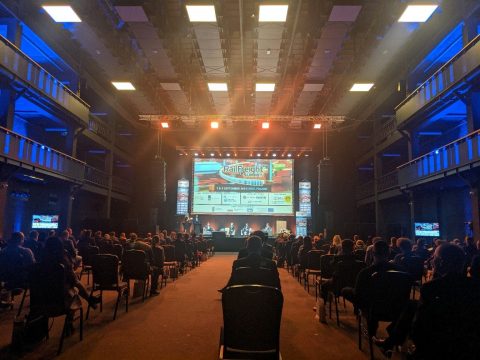 Does the glory of the New Silk Road end where ocean rates drop?

To a certain extent, the high sea freight rates and shortage of capacity have attracted more customers to the rails of the New Silk Road. When everything returns to normal, will the glory of the China-Europe Express end there? This was the topic of debate at the RailFreight Summit Poland, which was held on 1 & 2 September in Lodz.

“Under the influence of the pandemic, ocean freight rates have skyrocketed, and many customers are beginning to realise the potential of rail transport. Despite the difficulties, the China-Europe Express is still running smoothly and is increasingly accepted by the market”, said Koubek.

“The current situation is that as long as there is space, it is booked, no matter what the cargo is, no matter how expensive the cargo is.” However, he does not expect all these customers to stick around, he acknowledged. “When ocean freight rates return to normal levels, we will not see low-value goods and bulk goods appearing on the railway again. What will remain are high-value goods, the most suitable type of cargo for rail transport on the New Silk Road.”

According to Hasenkampf, the future course of the New Silk Road depends largely on China’s positition. After the maritime chaos is over, the rail transport market could take two roads. If the Chinese government continues to invest in and support rail transport, the market will remain as it is, with the same rates and the same demand for freight. Now, in terms of cost, rail transport still has an advantage over sea transport, he explained.

“Or, China continues to phase out its subsidies. In this case, the New Silk Road will eventually be there for goods that are truly suitable for it. In the long run, the operation of the China-Europe Express will be more stable and the congestion along the way will be reduced. I prefer the latter scenario, because in the end we still have to establish a stable position on the market and become what we want to be”, Hasenkampf said.

“During the Suez crisis, some railway companies encouraged cargo owners to use rail, and many peopel said that rail freight was a savior or substitute for the maritime industry. I am sorry to say that this is nonsense”, Koubek said, “Just to transfer the cargo of a ship to the rails, 100-200 trains are needed. Just imagine how many ships there are between China and Europe. The additional capacity required is incalculable. Railways are only suitable for specific cargo; suitable for customers who are willing to spend more money for shorter shipping times.”

Hasenkampf also elaborated on the disparity in capacity between the two modes of transport: “Railway only transports 4-5 per cent of Central European cargo. Neither China’s, nor Europe’s infrastructure has enough capacity to transport that much cargo.”

Regardless of capacity, the environmental benefits of rail freight are not enough to replace sea freight either. “Now, the shipping industry is also reducing carbon emissions, so when customers consider environmental aspects, shipping is also an option”, Koubek concluded.

Alexey Grom: New Silk Road is on the brink of unified waybill