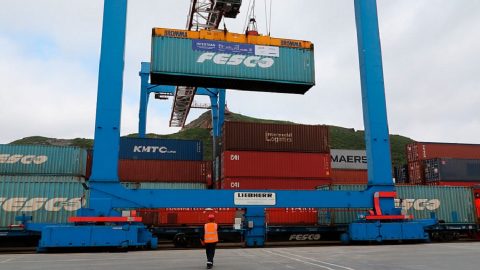 Russia is developing its Far Eastern ports as transhipments hubs on the New Silk Road. This is in response to declining volumes on the land route via Russia, caused by additional prevention and control measures implemented by China. Due to such measures, the volume of transit cargo at the Sino-Russian border fell by 27.7 per cent in August, year-by-year.

This downward trend is not likely to change on the short term. Therefore, Russia is making efforts to develop ports in the Far East. This was explained by Alexei Hilo, deputy general manager of Russian Railways, in an interview with Russian Satellite News Agency.

He said that when the pandemic in China returns, the problem of declining traffic at the Sino-Russian border will continue to exist. On the contrary, the transshipment business of ports in the Russian Far East, such as Vladivostok, is “developing well”.

Especially under Russia’s transit subsidy policy, Russian Railways has attracted a large amount of cargo from China and other Asia-Pacific regions through its Far East ports. Specifically, the volume of freight transport via the Trans-Siberian Railway has increased by 18 times. In the first half of 2020, Russian Railways transported 147 containers on this line, and now there are nearly 3,000.

In order to stimulate the growth of railway transit container traffic, the Russian government has implemented subsidies for local logistics companies. In August last year, the Russian prime minister signed a decree on the implementation of the federal subsidy budget. The amount of subsidy ranges from approximately 312 euros to 940 euros per container.

At the same time, westbound connections have priority in receiving subsidies over eastbound transportation. “The Russian government said: “the decision will increase the demand for rail freight transit services in Russia and will have a positive impact on the relevant economic sectors.” Judging from the current situation, the subsidies are indeed effective.

Russian Railways has put into practice its determination to develop its Far East ports. Not long ago, the company cooperated with FESCO Transport Group and Finnish logistics company Nurminen to launch the route from China (Shanghai Port, Ningbo Port and Qingdao Port) to Russia (Vladivostok) and Finland. The new intermodal route has a time limit of only 25 days.

In addition, shipping giants have also started this new multimodal transport attempt to efficiently connect the Asia-Pacific region and Europe through Russian Far East ports. In April of this year, Mediterranean Shipping MSC launched a new sea-rail combined transport route. The itinerary started in Yokohama, Japan and Busan, South Korea. After arriving at Vladivostok and Vostochny in Russia by sea, the cargo was transferred to the train to St. Petersburg, to continue via the Mediterranean Sea.