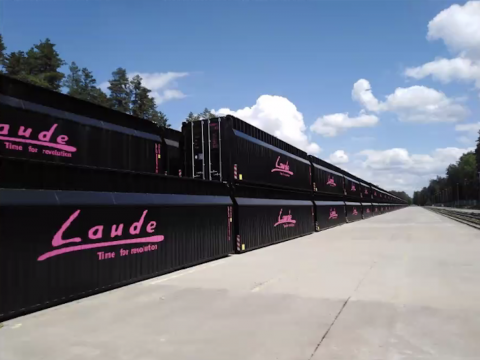 Laude Smart Intermodal S.A has designed a new high-capacity container: the 40’ SBOT. The Polish logistics company has explicitly developed the container for transportation between China and Europe. Its primary characteristic concerns the increase of capacity by 25-30 per cent compared to standard 40’ high-cube containers.

“Rail freight on the New Silk Road has been developed for a long time, but containers have remained static, and it is time to explore new solutions to optimise transport on these routes, ” said Maciej Cetnerowski, the company’s Director of Intermodal Development. The Polish company has already put 200 new containers in operation, estimated to increase to 1,000 by 2022.

Although this number is not surprising concerning the traffic volumes on the Eurasian corridor, Cetnerowski commented that “We had to start somewhere, and we decided to dive in head and build these containers to show the possibilities in shape and form instead of on paper.”

“Our main point was to increase the capacity of the container at the same time, allowing the container to be handled like any other 40′ unit. In this sense, there is no need for special cranes as the container can be handled with standard reach-stackers or cranes,” continues Cetnerowski. The new Laude containers have a different form. They have a narrower-than-usual top and a wide bottom. However, according to Cetnerowski, these characteristics do not interfere with their stacking and storage in freight yards.

Moreover, the 40’ SBOT containers are heavier than regular containers. They weigh 6,950 kilograms, while their maximum payload is 2,950 kilograms gross. “Yes, it is a heavier unit, but it allows the transportation of heavier cargo. High-density cargo is perfect for the container, but multiple loading options allowed by its shape and size does not limit its purpose”. However, “the ultimate goal is to run mixed trains both with standard 40’ and 40’ SBOT containers. In this way, different types of cargo will have a suitable place in the containers,” explained Centerowski.

As far as limitations go, the container’s increased capacity could become an issue for last-mile operations. Nevertheless, “the maximum payload in Eurasian rail freight is the number one prerequisite,” said Cenetrowski, “and that is why the increased capacity option is worth exploring”.

The new container offer is not the only move the Polish company has made to enter the China-Europe shipping market. In addition to designing new containers, Laude Smart Intermodal is expanding its terminal in Zamość on the Polish-Ukrainian border. The project aims to respond to the growing number of China-Europe trains passing from the border point. The terminal is considered a high-quality facility that can provide an effective alternative to the congested border point of Malaszewicze-Brest on the Poland-Belarus route. Upon completion of the expansion, the terminal’s capacity will reach 150,000 TEUs.