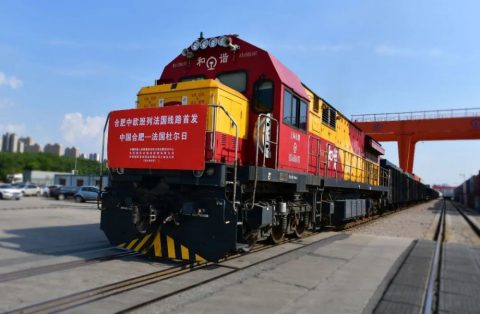 First train departed from Hefei, on the way to French hub of Dourges

A new route has been established on the New Silk Road. It runs from Hefei on the east coast of China to Dourges in France. On 5 September the first train departed from the logistics base of Hefei North Station, loaded with 86 standard containers of export goods. It is expected to arrive at the destination in 16 days. In the future, it should be a bi-weekly service.

The Hefei-Dourges train is fully loaded with refrigerators and freezers produced by Hefei Hualing Co., Ltd., with a total of more than 5,000 pieces of goods worth about 630,000 US dollars. The whole journey is about 10,000 kilometers, and it is expected to arrive in Dourge on 21 September.

According to Hefei International Dry Port Group, the next departure is scheduled for 25 September, after which it will depart twice a month. Currently this line is customised for home appliance customers, but it will become a public train in the future. The opening of this line marks the official operation of the 24th line of Hefei China-Europe Express. At present, Hefei has established connections with 25 international node cities in 9 countries including Germany, France, and Russia.

Dourges is an important transportation hub in northern France, adjacent to Belgium, with a large integrated cargo transshipment center for sea, land and air transportation. It is in a key and advantageous position in the European logistics chain. The city provides rail connections to many destinations in southern Europe, such as Bordeaux, Avignon, Lyon, Marseille and other southern French cities. At the intercontinental logistics center in Dourges, batches of goods are delivered to European markets such as France, Spain, Italy, and Poland.

However, this is not the first time that Dourges has established a railway connection with a Chinese city. As early as 2017, the city has become one of the important stops on the European section of the new Silk Road. On 28 October 2017, a train loaded with apparel products from Decathlon departed from Wuhan. This Wuhan-Dourges train route is individually customised according to the retail logistics needs of Decathlon enterprises, and the entire route is covered by the company. It only takes about 17 days for the train to complete the 10815 km route, which is only half of the traditional shipping.

In an earlier interview with RailFreight Live, Shen Xiaogen, member of the party committee, director and deputy general manager of Hefei Industrial Investment Group, and chairman of Hefei International Dry Port, talked about the frequent and close railway freight connections between Hefei and Europe.

At present, the Hefei International Dry Port is operating the routes from Hefei to Hamburg and Neuss in Germany, Mara in Poland and Helsinki in Finland. The Hefei-Helsinki route is the only China-Europe express train that goes directly to the Nordic countries. In terms of journey times, the average is 14 days, and the return journey is 16 days.

“Although Hefei is not an inland city, its location is unique, connecting east and west, connecting south and north, providing stronger impetus and better support for the development of Hefei International Dry Port”, said Shen Xiaogen. Hefei is a comprehensive transportation hub across the country, connecting rivers and seas, connecting east and west, south and north. We have a “clock-shaped” high-speed rail network, which can reach many important cities across the country in three hours. Nine high-speed lines meet in Hefei.”