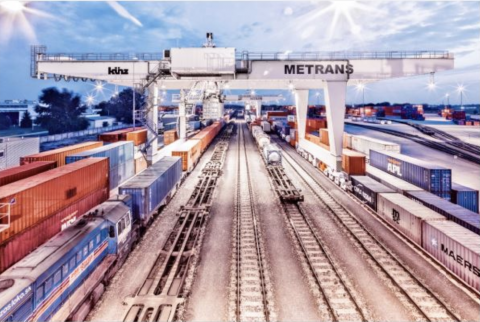 Xi’an-Dunajska Streda train soon to be on the timetables

There is good news for the Central and Eastern European region. The Xi’an-Dobra- Dunajska Streda train will be a regular service in the timetables from 4 September 2020. Every Friday a train will depart in the westward direction. Furthermore, the Slovakian end destination near Bratislava has all the means to become the second rail hub in the region.

It is not the first time the train from Xi’an arrives in Slovakia. Already in 2019 the first test shipments were carried out. The train firstly arrived in the Slovak terminal on 3 October, where it was immediately forwarded to the final terminals of Prague, Ceska Trebova, Budapest and Krems.

“The transit time was good; the journey was carried out in sixteen days.Today, we have increased volumes and we want to look for even better transit times. Therefore, it is now established as a regular service”, says Wanxu Dong, Managing Director of Beijing Transport Eurasia (BTE).

At the centre of a network

The service is offered by BTE and DBO Bahnoperator, in partnership with Metrans. “We are happy to announce that from September, the Metrans network will again be connected to Xian via Dobra” said CEO of Metrans Danubia Peter Kiss. According to him, same day connections are available from Dunajska Streda Budapest, Ceska Trebova and other destinations in its network.

Considering the fact that the final rail terminals are in most cases not more than 150km away from Dunajska Streda, this Slovakian hub on the border with Hunagry and Austria is well suited to become a second rail hub in the Central and Eastern European region. The most important hub for rail traffic from China has been Budapest.

The Xi’an-Dunajska Streda train is a successful example of a route on the New Silk Road that runs through Ukraine, a much more strategic transit route for end destinations in eastern Europe than via Belarus and Poland. Although relatively new, various players have expressed confidence about the route, despite political tensions in the county.

“We see big potential in this route”, said Martin Koubek from Metrans earlier. “Customs procedures may be something that requires development, but as far as I have heard Ukraine is willing to join the European customs NCTS system in the near future. From this perspective, it may become even easier to transport trains via Ukraine.”