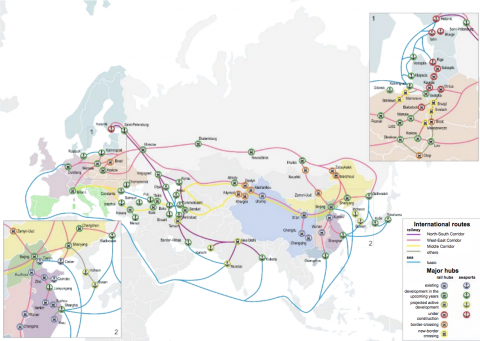 Container traffic between China and Europe witnessed an absolute record last month, judging from the volumes transited by UTLC ERA. The joint venture of Belarusian, Kazakh and Russian railways in May carried 52,5 thousand TEUs across the broad gauge railways. “That is twice as much as the same figure last year and represents an absolute volume record in monthly Eurasian container traffic”, the operator said.

The total volume of traffic carried by provided by UTLC ERA in the first half of 2020 amounted to 223 thousand TEUs, showing an increase of 65 per cent compared to the reporting period of last year.

“Exceeding the 50 thousand TEUs per month in transit container traffic is an important milestone which we have long been striving for. The traffic volume of 49 thousand TEUs was reported as early as May, and, despite the challenging situation in June, high motivation and close interaction with partners and customers helped us to achieve the goal”, said Alexey Grom, CEO of UTLC ERA.

The CEO went on to explain that joint efforts of shareholders enabled to maintain high speed of transportation and to minimise technological delays along the entire route of the 1520 mm track. “We had more than 100 trains operating daily, and the total fleet managed by UTLC ERA already amounts to almost 7 thousand railcars.”