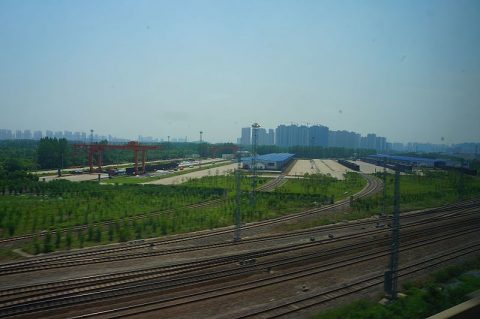 A fully loaded train from Hefei, on the east coast of China, arrives today in Tilburg, the Netherlands. It is the first train from this Chinese hub to arrive in the Dutch city. If all goes well, this may become the very next rail connection for tech-giant Lenovo.

The train is currently loaded with home appliances such as refrigerators and freezers, manufactured in the industrial city of Hefei. It is a customised train journey for a company in the region, explains Xiaogen Shen, CEO of Hefei International Land Port Development Co.,Ltd during an interview with RailFreight.com. This interview will be broadcasted in RailFreight Live today.

The train journey is however more than just that, Shen explained. “We have been keeping an eye on Tilburg, which due to its geographic location is a suitable hub for railway connections from China. Moreover, this journey should provide us with the experience to facilitate the export of Lenovo computers and laptops manufactured in Hefei”, he remarks.

The mother company of Lenovo is Lianbao Electronic Technology Co. Ltd, a huge firm with its main production base in Hefei. “This company exports electronics worth of 7 billion US Dollars per year. Our mother compay holds a share of 49 per cent in Lianbao. We are hoping to gain the nessecary experience to set up a direct rail connection from Hefei to Tilburg for the shipment of Lenovo products”, the CEO said.

The laptops and computers of Lenovo already make their way to the Netherlands, but via Chengdu, a logistics hub more centrally located in China. The volumes from Chengdu rely on a combination of production in Hefei and Shenzhen.

Lenovo has been on the New Silk Road since early 2017, when it decided to shift some of its volumes from sea to rail. The company works with a build-to-order business model, which means that it only starts manufacturing after it has received an order. It is therefore important that the transportation is carried out fast.

Do you want to watch the full interview with Xiaogen Shen? It will be broadcasted today in RailFreight Live. You can watch this broadcast at 1PM via our YouTube Channel.