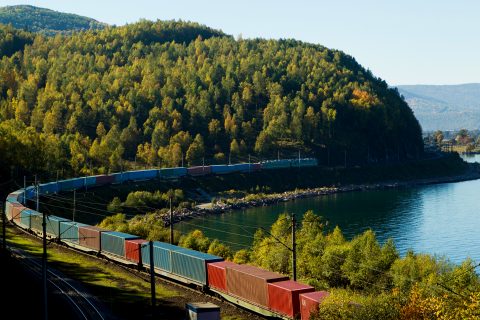 In April 2020, the first few full-length mail container trains started their scheduled runs between China and Europe. Since then, 17 mail trains in total have been handled by UTLC ERA, the main operator on the broad gauge network. This equals 1,940 TEUs of mail, the organisation said.

The main cities where the mail container trains are formed in China are Chongqìng, Yiwu, Zhengzhou and Dongguan. On their way from China the trains pass through Kazakhstan, Russia and Belarus. The average transit time from the Chinese border to the EU border is 4.9 days. Another two trains are on transit at the moment, carrying mail from China to France and Spain, according to the operator.

Mail is increasingly finding its way to Europe by rail. E-commerce has brought about a rising volume of packages on the move between the continents, and they are not solely transported by ship or plane. “Due to the limitations imposed on air freight, the railway channel offered by UTLC ERA started fulfilling the strategic role of a reliable link between China and Europe for uninterrupted mail delivery”, says Alexey Grom, UTLC ERA’s CEO.

However, there are also challenges faced when transporting mail. This mostly has to do with the legal framework, which is different from one territory to another. “Seamless freight transportation, including mail transportation, is one of the main technological challenges that the Eurasian rail network faces now. That is why, together with our shareholders and partners, UTLC ERA is currently in the process of creating a common information space serving railway transit of container trains, the CEO said.

UTLC ERA has also presented the Universal Postal Union with several ideas on how to reduce the paper document flow accompanying transportation of mail over railways. “We are hoping for their positive feedback and new orders for transit,” notes Grom.

Around the same time last year, the CIT, the organisation responsible for the legal framework of freight transport, initiated a pilot project on carriage of postal items from China to Europe by rail. The organisation teamed up with the Coordinating Council on Trans-Siberian Transportation (CCTT) and the Universal Postal Union (UPU). Together they introduced the use of the common consignment note for the transcontinental carriage of postal items.

The common CIM/SMGS consignment note is the first step towards a uniform body of law for Eurasian freight traffic by rail between Europe and Asia. Where Europe applies the CIM Uniform Rules, Russia, China and other Asian countries apply the SMGS Convention. With the CIM/SMGS consignment note these systems are standardised, resulting in less interruption of movement, entailing delays, additional costs and administrative burdens.