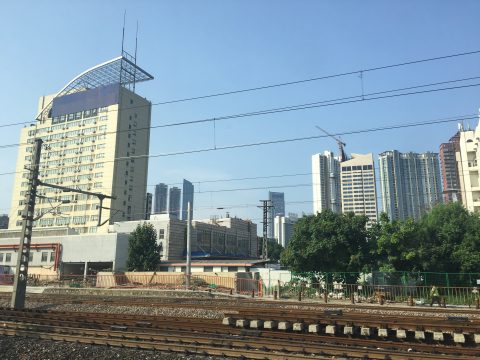 Brand new train from Suzhou on the way to Europe

Two brand new trains departed from Jiangsu in the Chinese province of Suzhou yesterday. They are loaded with goods from the Suzhou Free Trade Zone and headed to Russia and Europe. The departure also marked the opening of the new customs supervision zone at the Jiangsu International Railway Logistics Center. Deputy Mayor Yang Zhiping attended the event.

The new China-Europe train is fully loaded with dozens of industrial products such as CNC machine tools, household appliances, medical equipment, etc. A total of 172 TEUs, with a cargo weight of more than 1100 tonnes and a value of nearly 100 million yuan (13 million Euros) was put on rails. The goods come from production and trading enterprises in the Suzhou Free Trade Zone, on the east coast of China.

From January to April this year, a total of 104 trains ran between Suzhou and European cities, carrying 4,264 40ft containers. The month of March saw a spike in cargo volumes; an increase of 50.8 per cent was recorded, according to Chinese media.

The service is provided by Suzhou CEIBS and Suzhou International Line Freight Co.Ltd. The latter was selected as the first batch of key international logistics providers in the country entitled to reinstate China-Europe rail freight traffic after the pandemic.