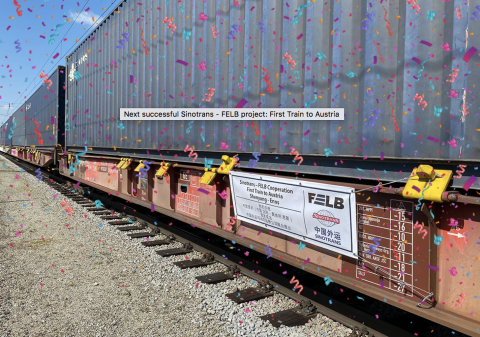 A new China connection for Austria is on its way

For the first time, a train originating from Shenyang in the east of China, arrived in Enns, Austria on 1 April. It is the next phase in the successful cooperation between FELB and Sinotrans, which has already led to many connections on the New Silk Road.

The connection with the Chinese city of Shenyang isn’t new either. FELB, a subsidiary of Russian Railways Logistics (RZD) operates routes to major commercial hubs in Europe like Regensburg, Duisburg, Hamburg, Milan and Warsaw. With the first pilot blocktrain to Enns, a new milestone was accomplished.

The train departed from Shenyang on 14 March and took the Trans-Siberian route, which runs via Manzhouli / Zabaikalsk. Continuing its journey, the more than 10,000 km through Russia were bridged in seven days, the lead time that has been projected for this route. The train was formed of 41 x 40 HC container carrying raw materials for a global leading Austrian company. A second train already departed and is expected to arrive within the next few days.

“For the pilot project, we transported raw materials needed for production in Europe. However, taking in consideration the destination of Enns and surrounding industries, and looking to Shenyang and its infrastructure, this route might also be interesting for other industries. For example, automotive industries and related suppliers, and global acting manufacturers with sites within this region could benefit from this service”, said Jürgen Huschka, FELB Austria’s Managing Director.

From start to finish

In Enns the train was received by Container Terminal Enns (CTE). Enns is one of the strongest industrial regions in Austria and CTE is positioned as a trimodal transshipment point, as part of the ENNSHAFEN. Its infrastructure, roads, quays and rail facilities give companies access to all modes of transports. It has a capacity of more than 500,000 TEU.

Shenyang is a major sub-provincial city and the provincial capital of Liaoning province, China. Shenyang is an important industrial center in China and is the core city of Shenyang Economic Zone. It’s key trades are in heavy industry, particularly aerospace, machine tools, heavy equipment and defence, and recently on software, automotive and electronics. Shenyang is also one of most important railway hubs of Northeast China with high-speed and frequenct connections to Beijing, Dalian, Changchun, Harbin and Fushu.