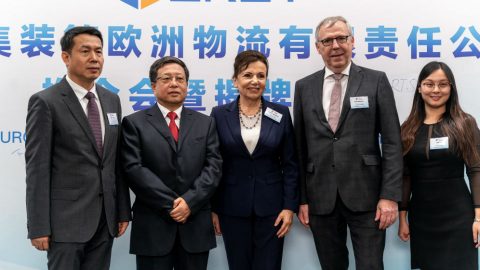 China Railway strikes down in Duisburg

China Rail Container Transport, which belongs to China State Railway Group, has established a subsidiary in Germany with an office in Duisburg. It thereby emphasises the importance of Duisburg for rail freight traffic between Europe and Asia.

The subsidiary has been called CRCT Europe Logistics GmbH, and the office was opened festively on 26 November, in the Mercatorhalle Duisburg. CRCT plans to use the location advantage of Duisburg to expand its strategic cooperation with all its European partners.

According to CRCT, more than 6,700 trains have traveled to and from China between January and October 2019. Last year’s figure was 6,300. This indicates a growth rate of 6.3 per cent, despite a period of less departures due to Chinese restrictions on empty containers.

The mayor of Duisburg, Sören Link, said in his speech that around 100 Chinese companies have established in Duisburg and have opened up great opportunities for development and cooperation. In his view, the New Silk Road have brought China and Duisburg closer in terms of economy,, trade and cultural exchanges.

CRCT is a specialised container transport company directly subordinate to the China State Railway Group (CRCT). Its annual turnover is currently 300 million euros. CRCT as the single operating and service platform of China Railway Express and the coordination center of the China-Europe Express Transport Coordination Committee, has a complete container transport network in China.

There are now 22 cities in China which have railway connections with Europe. China Railway Express connects 56 cities across these two continents. In recent years, train traffic between Europe and China has increased rapidly. In 2018 3.7 million TEU was transported across the corridor. The forecast is that this will increase to 8.2 million in 2020 and 11.4 million in 2035 (Prognos).